Hoverboards Are Almost on the Market!

When most people hear “hoverboards” the first thing that usually pops into their mind are the two-wheeled, balance boards that have recently been every child’s dream gift. However, we’re not talking about those – instead, we are talking about real-life personal flight machines!

That’s right! The world of personal aircraft may be closer than we realize! Check out the latest in hoverboard technology, the Flyboard Air. 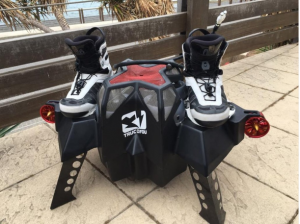 The product is only a prototype, yet still has many people talking about the potential of this latest technological advancement. During its debut flight, the Flyboard Air was able to carry the company founder, Franky Zapata well over a mile up the coast of France, setting a Guinness World Record in the process.

The company behind this head turning product is Zapata Racing, who in 2008 became a well know manufacturing brand of personal watercraft. Some of you may have seen their products before, the water powered Flyboard has recently become a popular attraction in beach towns across the nation. With a similar design, the water powered version of this product uses water pressure to make itself become airborne.

Expanding off of that design and technology, Zapata Racing began to look into a personal hovercraft that could operate without the use of water propulsion. Isn’t it fascinating how the company expanded on their original product, to develop something completely different?

At Davison, we see similar situations like this all the time! Just because something has already been invented, doesn’t mean there isn’t a better way to go about solving a problem by elaborating on an existing product. Companies do it all the time, take Zapata Racing for an example! They revolutionized water sports and now they are adapting their product to pave the way for personal aircraft!

Check out the Flyboard Air as well as Zapata Racing’s other cutting edge products here!

Do you have a product idea that would serve as a better way of doing something? Our professional team at Davison is always ready to speak with new idea people to help move their ideas forward. Confidentially submit your invention idea today!

Davison had no involvement with the design or development of the featured product.