Yesterday, June 17th, marks a milestone anniversary in American culture (and no, we’re not talking about the Battle of Bunker Hill or the Watergate break-in). What we are talking about is the 1980 copywriting by Atari of the video games Asteroids and Lunar Lander. You remember Atari, the originator of many of the games that started the whole video game craze. But actually, video games started way before Atari came on the scene. So we thought it would be a good idea to review the history of the business that has become such an important part of our culture, and a multi-billion dollar industry. 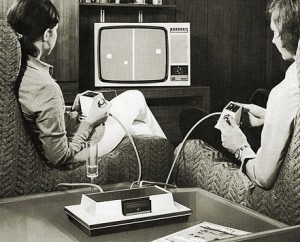 The history of video games goes back as far as 1947, when a couple of physicists—and the original video heads—named Tom Goldsmith and Estle Mann applied for a patent for an interactive electronic game they described as a ‘cathode ray tube amusement device.’ The game consisted of trying to shoot down an airplane by maneuvering a dot over the plane and firing your machine gun.  It sounds pretty cool for 1947; but unfortunately, while they did receive the patent in 1948, they were never able to market the game.

Then in 1952, a Cambridge PhD student named Alexander Douglas was writing his thesis on computer/human 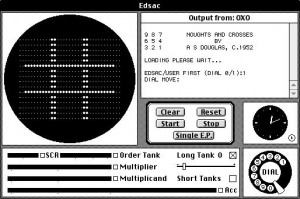 interaction when he built the first digital graphics game to run on a computer. It was called ‘Noughts and Crosses’ (or tic-tac-toe in the US) and known by its shorthand name of OXO. It used a rotary phone dial to let you place your symbol in the tic-tac-toe matrix. Unfortunately, this too was never marketed, since you needed a University sized computer to run the program. In fact, most of these early computer games were built at universities and required large mainframe computers to operate; therefore, they couldn’t be practically marketed.

Still, there were many games being created in the 1950s and 1960s, so the idea of the video game had clearly captured the imagination of a lot of very bright people. For instance, in 1961, students at MIT created a game called SpaceWar!, where (you guessed it) players fired missiles at each other’s spaceships. In 1966, a couple of defense contractor physicists developed Chase, the first game designed to play on a standard television set. In 1969, a bunch of AT&T computer programmers created a game called Space Travel and in the process, invented the UNIX operating system.

Then in the 1970s, things changed. In 1971, a couple of guys named Nolan Bushnell and Ted Dabney created a coin-operated arcade version of Spacewar! and named it Computer Space. They sold the concept to a manufacturing company who built and sold around 1,500 machines to pinball arcades around the country. Though the game was hard to play and wasn’t a big money maker, it did make history as the first mass-produced video game that was available for commercial sale. And with the money they made from the sale of that game, Bushnell and Dabney founded Atari, Inc. in 1972.

Atari was, of course, the first true video game company in the world, and became an overnight success with the release of the most famous video game ever, Pong. Atari sold over 19,000 Pong machines and went on to create some of the most iconic games in history like Asteroids and Lunar Lander. But the genius of Atria was that they were not content to merely make arcade games, they realized that the big money was in creating games that could be played at home on a TV, so they created the Atari Video Computer System (later renamed the Atari 2600) that could play all of Atari’s games. Marketing genius, to say the least.

Atari has, of course, spawned many imitators and competitors, a few of which have displaced Atari as king of the video game. Heavy hitters like Sony (PS3), Microsoft (Xbox 360), and Nintendo (Wii) have taken over and dominate the market, with the help of third party developers who created games like the BioShock, Halo and Call of Duty franchises. And the future looks bright thanks to developers at companies such as Valve and Rockstar Games, who not only put quality over quantity with their products but also look to innovate with their story, gameplay and graphics. So as we load up our favorite game and kill some zombies or maniacal robots, let’s give a nod of thanks to those pioneers who started it all.