You might think that the swimming pool wasn’t really invented; that long ago there was a hole in the ground that filled with rain water and one of our caveman ancestors jumped in on a hot day and said, “Man that feels good,” and you’d probably be correct.  But the purposeful construction of a large container designed to hold water for the expressed purpose of refreshment, relaxation, and recreation; now that took some inventing. So with this being the start of the hot summer season, we thought we’d take a look at the history of the swimming pool. 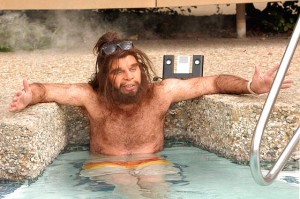 Swimming as an activity goes back as far as 3500 B.C. in ancient Egypt and later in ancient Greece, Rome, and Assyria.  The first swimming pool is credited by historians as the ‘Great Bath’ at the site of Mohenjo-Daro in modern-day Pakistan. Created during the 3rd millennium BC, it was a pool that measured 12 by 7 meters and was lined with bricks and covered with a tar-based sealant. There is also evidence that the first heated swimming pool was built by Gaius Maecenas of Rome in the first century BC. It turns out that Gaius was a close friend to the Roman Emperor Caesar Augustus, so we can imagine that Rome may have been the birth place of the wild ‘pool party’ as well.

But it’s really in the last couple of hundred years that swimming pools began to evolve. Swimming clubs started to become popular in Britain in the early 1800s. The oldest surviving Swimming Club in Britain, the Maidstone Swimming Club, was said to have built its first swimming pool in response to club member drowning in the River Medway. By 1837, six indoor pools with diving boards could be found in London.

In the US, municipal pools really took hold around 1862 as part of an effort to combat disease. Cholera was thought to be associated with poor human hygiene, so cities opened ‘river baths’ in hopes of preventing cholera outbreaks. The baths were enclosed structures housing large wooden tank-like pools that were submerged into the local river. The pool design allowed river water to be circulated naturally between the wooden boards. Soon in-ground concrete or tile swimming pools were being built all over the country. 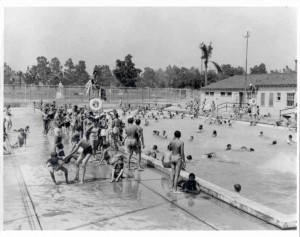 After the modern Olympic Games which began in 1896, with swimming races, among the original events, the popularity of swimming pools began to spread as newspapers wrote stories and showed photographs of the events. This led to acceleration of municipal pool construction and the introduction of swimming pool chlorination as public officials aggressively publicized pool sanitation measures to alleviate long-standing fears of waterborne illnesses. Hollywood helped the swimming pool boom by glamorizing swimming with movie stars like Esther Williams and Olympic swimming star Johnny Weissmuller (a.k.a. Tarzan).

After World War II, when returning GIs got their GI loans and moved to the suburbs, a backyard swimming pool became a status symbol for all to see.  But since a traditional in-ground pool was very expensive, cheaper above-ground pools became an attractive option. They didn’t require the expensive earthworks required for an in-ground pool, they were much easier to maintain and could be taken apart in the winter.

Today we have many options for pools and their dramatic price reduction has enabled many more families to own their own pool. Today, many in-ground pools are constructed of fiberglass pre-formed shells that are a lot less expensive than the traditional poured concrete in-ground pool.  Above-ground pools are cheaper and stronger than ever before.

Many pools are switching from chlorine to common table salt to sanitize the water. Chlorine generators produce natural chlorine from salt by separating salt molecules into their component parts: chloride and sodium. These salt pools account for nearly 75% of new pool installations.  And state-of-the-art water purification technology is eliminating the need for chlorinated pool water altogether because it is able to filter the water so perfectly that it’s actually drinkable. 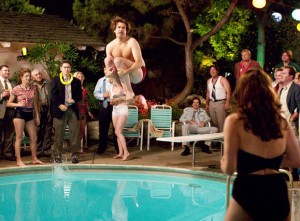 So there you have it, a brief history of the swimming pool. With an estimated 10,000,000 swimming pools in the US alone, they have clearly become a part of our communities and our own homes; and for many of us, a dip in a cool pool on a hot day is what summer is all about.