Since May is National Bike Month, we thought this would be a good opportunity to look into the history of a very important safety device—the bicycle helmet. Bicycles have been around since the 1860’s, when a machine known as the Velocipede came on the scene. But this bike wasn’t a big success due to its barrel-stave like metal tires which made riding on the cobblestone roads of the day a bone-jarring experience, to say the least. 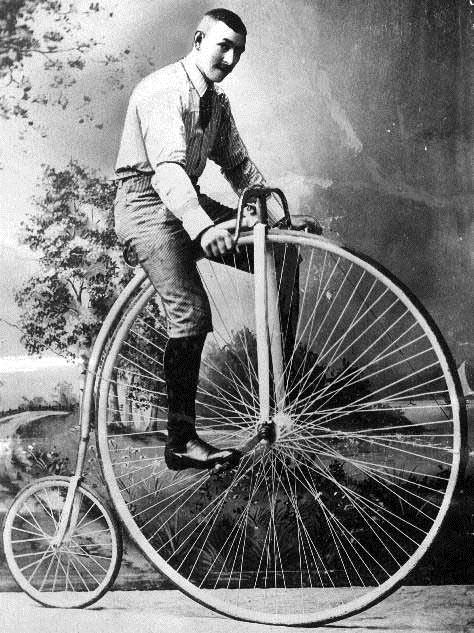 By the 1870’s, the High Wheel Bicycle became popular because the solid rubber tires and long spokes of the large front wheel provided a much smoother ride than its predecessor. But because the rider sat so high above the center of gravity, if the front wheel hit a rock or crack in the road, the entire machine rotated forward on its front axle, and the rider was dropped unceremoniously on his head. In fact, the term “taking a header” comes from bike riders. As head injuries began to climb, it became apparent that something had to be done.

By the 1880’s, riding clubs were becoming more and more popular and, as their members saw that head injuries were a problem, they began to advocate the use of helmets. At first, they used pith helmets. Pith is a plant material that is easily crushable, but was likely the best material available at the time. Although it would probably break up on impact, riders only needed protection against a single impact to know the helmet saved them, and know it was worth buying another helmet.

At the beginning of the 20th century, it was apparent to racing and club bicyclists that the worst injuries and the most fatalities came from head injuries. Racers began to use helmets formed of a ring of leather around the head and a wool ring above that. Then the style evolved and the ring of leather was supplemented by strips of leather arranged longitudinally on the head. These offered a little better protection than the pith helmets, but still more was needed. Over the coming decades, helmets were developed with hard exteriors and foam liners, but they tended to be either heavy or ineffective in a crash, and sometimes both. 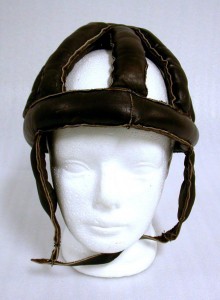 By the 1970’s, a group called the Snell Foundation began comprehensive testing of bicycle helmets and found that none of the helmets on the market were really effective, so they established some basic criteria for head protection, which coincided with the bike boom of the 1970’s, when many American adults took up cycling as an exercise and a sport. Then in 1975, Bell Auto parts invented the first real helmet for cyclists. It consisted of a hard plastic shell padded with a foam-like material. This was the beginning of the modern helmet.

In 1984, The American National Standards Institute introduced standards for helmets that were widely accepted. This helped to remove ineffective helmets from the market and raise the quality of all helmets. Soon a foam liner made of expanded polystyrene was invented, and by the 1990’s a thin hard shell was added to the polystyrene foam helmet for durability.

Today’s helmets are even lighter, more streamline, and have multiple vents for comfort and adjustable straps to make them more secure and easier to wear. As statistics reinforced the drop in head injuries with the increasing use of helmets, many states in the U.S. have made it mandatory to wear helmets while riding a bicycle—a move supported by medical and road safety organizations. Most parents today teach their children to never ride their bikes without a helmet, putting on a helmet should become as natural as wearing a seat belt and as easy as, well, riding a bicycle.