Yesterday was, of course, Memorial Day and most of us were probably outdoors, celebrating at a picnic or a parade—eating, drinking and soaking up the sun. But yesterday was also Sunscreen Protection Day, so we thought this would be a good time to look into the history of sunscreen. Let’s take a look at how this wonderful protective product came into being.

With summer on the horizon and long hot sunny days ahead, we all want to enjoy our time in the sun and to avoid a nasty sunburn. Of course, you can simply cover your entire body in a sheet or hide under an umbrella to avoid the harmful rays of the sun; but if you have any desire to move, play or swim, that’s probably not practical. So sunscreen was invented as a way to give us protection from the burning rays of the sun in a way that lets us enjoy the great outdoors.

From ancient times, humans have made the connection between overexposure to sunlight and painful, blistering red skin. In fact, the ancient Egyptians made potions of rice bran extracts and jasmine to ward off sun damage and heal burned skin. But until the 19th century, most scientists believed that sunburn was caused by heat damage. Then in 1801, a scientist named Johann Wilhelm Ritter was able to measure light below the visible spectrum and discovered ultraviolet (UV) rays. He postulated, correctly, that the UV radiation was causing skin cells to become inflamed, and that it was this radiation, not heat, that caused sunburn.

Further experiments throughout the 1800s clearly demonstrated the causal link between UV rays and sunburn, but it took another century before a practical lotion was invented to protect skin (this explains why large hats and parasols were in fashion). Then in 1928, Karl Hausser and Wilhelm Vahle reported that sunburn in human skin is caused by specific wavelengths of the UV spectrum, and realized that the skin could be protected by filtering out those wavelengths using an emulsion of para-aminobenzoic acid (PABA) and benzyl salicylate. This led to the first commercially available sunscreen produced in the United States.

Around the same time in Europe, Eugene Schueller invented another type of sunscreen and went on to start the company L’Oreal, now a billion dollar conglomerate for skin and hair products. Another European, Franz Greiter, created a product called Gletscher Crème (Glacier Cream) after getting a bad sunburn while mountain climbing in the Alps. He developed a way to measure a product’s ability to block ultraviolet rays, which became known as the Sun Protection Factor, or SPF.

Back in the United States, Benjamin Green, an airman and pharmacist, used a greasy substance called ‘red vet pet’ (red veterinary petrolatum) to protect himself and other soldiers stationed in the Pacific from ultraviolet rays during World War II.  It worked primarily as a sun ‘block’—a physical barrier between the skin and the sun.  While it did the job, the petroleum-based compound was sticky, uncomfortable, and stained fabrics; making it impractical as a commercial venture. After the war, Greene later developed a more consumer-friendly formula and founded the company Coppertone. 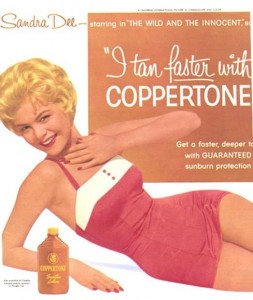 Today scientists have positively confirmed that spending time in the sun increases the risk of skin cancer and early skin aging. Medical organizations such as the American Cancer Society and the Food and Drug Administration (FDA) recommend the use of sunscreen because it aids in the prevention of developing skin cancer. In fact, the FDA has just this month released new labeling rules for sunscreens and offered more guidance for consumers trying to avoid sunburns. So go outside and enjoy your summer, but remember to use at least an SPF 15 before you do.