On this day in 1968, a patent was granted to a fellow named Fred Schollhammer for a hand-held portable beam generator. We now know that portable beam generator today as a laser, which is an acronym for “Light Amplification by the Stimulated Emission of Radiation.” Now, Mr. Schollhammer didn’t invent the laser, in fact there were many iterations and modifications to the concept of amplifying light to generate a powerful beam of energy. But given this important anniversary, we thought we’d take a look into the history of lasers. Here is what we found. 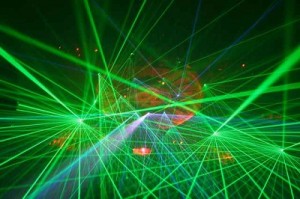 Before there were lasers, there were masers, which amplified microwaves rather than light—hence the “M” versus the “L” in the acronym.  In 1953, a physicist named Charles Townes and two colleagues at Columbia University built a device that energized ammonia molecules to produce amplification of microwaves at a frequency not seen before. This invention was based on theoretical principles put forth by Soviet physicists a few years earlier. But actually both masers and lasers were based on the principle of stimulated emission proposed by Albert Einstein back in 1917, when he correctly postulated that when atoms are pushed into an excited energy state, they can amplify radiation at the much higher frequency.

A few years after he developed the maser, Townes had teamed up with Arthur Schawlow, a physicist at Bell Labs, and began working on amplifying visible light as the beam source, rather than microwaves. By 1958, the two had worked out the theoretical model and published their calculations in the Physical Review. That same year, Bell Labs filed a patent application for what they were calling an “optical maser.” As it turned out, during that time at Columbia University, a graduate student named Gordon Gould was also working on a theoretical model of amplifying light using thallium, and coined the term laser in a published paper he authored in 1959. 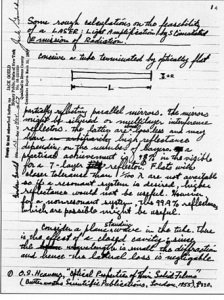 With the theories of Townes and Gould getting published in scientific journals, it didn’t take long before some intelligent scientists actually built working laser. The honor of the first goes to Theodore Maiman. While working at the Hughes Research Laboratories in California, Maiman used a ruby crystal to produce his light, a ruby red beam. Other lasers followed, including one using helium and neon, invented by another pioneering Bell Labs team. Soon, there was the argon ion laser, the carbon dioxide laser and the first chemical laser. 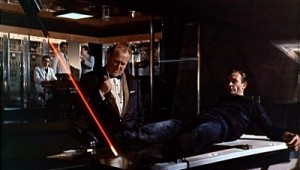 All of this exciting research had important applications. Because lasers amplify light in a coordinated and parallel fashion, the beam that is produced is perfectly linear, giving it extraordinary range with virtually no diffusion of the beam (a laser shot from the earth to the moon 240,000 miles away is calculated to only spread out to about 2 ½ miles). Because of this parallel amplification of light waves, the beam itself becomes very, very hot, which makes them perfectly suited for laser surgery in medicine, for cutting metals in industrial processes and creating great dramatic moments in film and television. Who can ever forget James Bond about to get carved up by and industrial laser in Goldfinger, when Bond asks, “Do you expect me to talk” and Goldfinger says back, “No Mr. Bond. I expect you to die.”

In addition,  lasers have a lot of practical applications in our daily lives as well.  We have laser light shows for entertainment, laser tag for fun, our DVD and Blu-ray players also use lasers to read the disks and many of us have had LASIK eye surgery to give us back to 20/20 vision. Now if we could just get those sharks to wear lasers on their heads, maybe Dr. Evil would be happy as well.