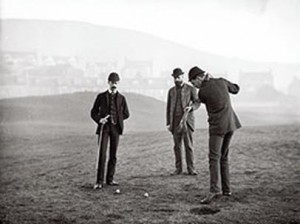 With Father’s Day coming this weekend, many fathers out there are probably thinking about one thing:  golf.  Golf is that crazy game where we whack a small white ball with a club down a long stretch of beautifully quaffed lawn, then try to roll the ball into a small hole using another club and end up swearing like sailors when it doesn’t go in.  Sounds like a good way to relax on a Sunday afternoon, right?  Well, we must love to swear because, according to the National Golf Foundation, 15 million Americans play golf every year. So what is it about this game that so many of us love to play and how did it start?  Let’s find out.

The origins of golf are unclear and hotly debated. Many golf historians say that golf began in Scotland.  Others say that the Dutch started golf as a game played with a stick and ball on frozen canals in the wintertime. Still others say that golf has been played in China since the Southern Tang Dynasty, 500 years before the Scots ever picked up a club. But, while ‘stick and ball’ games have been around for many centuries, the game as we know it, played over 18 holes is generally considered to be a Scottish invention. The first documented mention of golf in Scotland appears in a 1457 Act of the Scottish Parliament, an edict issued by King James II of Scotland prohibiting the playing of “gouf” as it distracted soldiers from their archery practice. The word golf—or as they say in Scotland: “gouf”—derives from the Dutch word “kolf”, which means, quite simply, club.

But modern golf really began in 1744, when the oldest surviving rules of golf were written for The Honorable Company of Edinburgh Golfers and formed the basis for all subsequent codes. But it took another one hundred years before the game spread outside of Scotland. In the 1850s, Queen Victoria and Prince Albert built Balmoral Castle in the Scottish Highlands. Their frequent visits and royal enthusiasm for Scotland and golf caused a boom in tourism, and a wider interest in Scottish culture and golf. By the late 1800s, golf had spread throughout Britain and Europe;,and then landed firmly in America. In 1894, several American golf clubs met in New York City to form what was to become the United States Golf Association (USGA).

Since then, the biggest evolution in the game has been in equipment. Some of the biggest advancements have been in the development of the golf ball. Wooden balls, hand-carved from hardwood, were the first golf balls, and were used between the 14th and 17th centuries. These balls were replaced by the feathery ball, a hand-sewn round leather pouch stuffed with chicken or goose feathers and coated with paint. Despite these leather pouches’ obvious drawbacks, the feathery was still a dramatic improvement over the wooden ball, and remained the standard golf ball well into the 19th century. 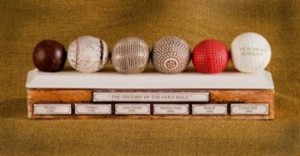 In 1848, the gutta-percha ball—or guttie—was introduced. The guttie was made from dried tree sap and had a rubber-like feel. It could be made round by heating and shaping it in a round mold. Because gutties were cheaper to produce and had improved aerodynamic qualities, they soon became the preferred ball.

Then, in 1898, a manager at B.F. Goodrich was playing with some rubber thread, wound it into a ball and bounced it. The new ball went far, and it didn’t take long for the manager to realize that adding a cover of rubber thread to the ball might just make a great golf ball. It did, and this new ball quickly replaced the guttie. By the 1960s, a new synthetic resin material called “Surlyn” was introduced by du Pont; it was used for the ball’s core and new urethane blends used for the covers. These basic materials continue to be used in modern golf balls.

The evolution of clubs went hand in hand with the evolution of golf balls, as new club styles have tended to follow innovations in ball design. As you can imagine, different clubs were needed for whacking a hardwood ball versus a feathery versus a rubbery-type ball. Golf clubs have evolved from iron clubs to hickory wood shafts to steel in the 1960s. The latest golf club technology employs the use of graphite shafts and lightweight titanium heads, which allows the club head to be made much larger than previously possible. The strength of these modern materials also increases the spring-like effect of the club face on the ball, increasing the distance the ball travels. So for all of the fathers out there who are planning a golf outing this Sunday, have a happy Father’s Day and remember to say “Fore.”