Here’s Why You Shouldn’t Pre-Judge Inventions 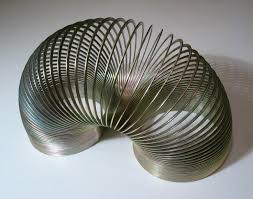 You know the popular saying, “Don’t judge a book by its cover.” That same sentiment can apply to inventions as well!

In today’s blog, we’re going to share a story with you about a very popular invention that’s the perfect example of why it’s important to not pre-judge invention ideas.

Without further ado, here’s the story of a famous toy – the Slinky!

The invention of the Slinky is simple; in fact, it’s almost too simple.

We’ve all played with this curious toy at least once in our life. Remember how it goes – you place the slinky at the top of the stairs and watch as it fluidly cascades down the staircase, step-by-step.

The story of the Slinky began when Richard James dropped a tension spring and noticed how it kept moving.  He told his wife Betty, “I think I can make a toy out of this,” and so began his two-year search for the best steel gauge and coil to use for the toy.

While James was working on the invention, his wife was working on furthering the idea by coming up with a name. Betty stumbled upon a Swedish word that means “traespiral” – sleek or sinuous. That word was “Slinky”.

The invention was complete and a name had been picked; the next step for this inventing duo was to present their toy at an event at the Gimbels Department Store in Philadelphia, Pennsylvania during the 1945 Christmas season.

They were nervous and unsure as to how the public would take to their invention. Would they like it? Would they think it was fun? Would it be a success?

With all of these questions swirling in their brains, they finally convinced a friend who was in attendance to buy their first Slinky.

However, it turned out that they didn’t have to convince their friend to purchase their product, because 400 were sold during the 90-minute Gimbels event.

In fact, in the first two years of production, James and his wife’s company sold 100 million Slinkys.

The Slinky’s story shows inventors far and wide that pre-conceived notions and pre-judgements of your invention are nothing but a layer of fog that’s clouding your journey’s progress down the road of innovation.

So, if you have an idea, believe in it and follow that dream, because you could one day be like the inventor of the Slinky.

Set aside all pre-judgements of your invention idea and, just like a Slinky, start at the top of a staircase and work your way from step-to-step to reach your goals.