Sure, the Jetsons had flying cars, which was a futuristic mode of transportation. Now, the future seems to be coming closer and closer, just in another form. In fact, what would you think of the idea of a car driving on its own? This seems almost like the Jetson’s flying cars, a little too futuristic to be real. But, you might want to rethink that, thanks to Google. 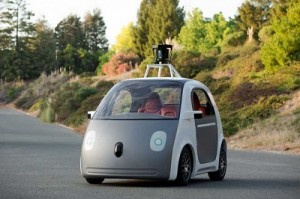 Despite the fact that Google has been developing self-driving cars for years, they recently unveiled a fully autonomous self-driving car which was built from the ground up with their partners.

So, how does a self-driving car work? For starters, there is no steering wheel, accelerator or brakes. Although a car with no steering wheel doesn’t seem like the safest mode of transportation, Sergey Brin, Google’s co-founder, said that a custom-built self-driving car can be safe. The safety factor can be found in the sensors that are located in strategic spots on the car as well as a big “stop” button. Additionally, Google’s autonomous car includes internal power steering, power brakes, foam bumper, a flexible plastic windshield and a 5 mile-per-hour speed limit for pedestrian safety.

So far, the gray prototype raises the comparison of a classic Volkswagen Bug. By the end of 2014, Google plans to build a few hundred prototypes and begin testing these invention prototypes on the roads of Northern California. These pricey prototypes are equipped with lasers, cameras, radar and GPS systems.  Each of the vehicle prototypes that will be tested will carry a human safety tester who will have the capability to take over the vehicle by way of a joystick in the event of an emergency.

Additionally, Google has already mapped out thousands of miles in a Silicon Valley suburb and has already done initial mapping in unnamed cities and states such as Florida and Texas.

These maps will tell the car what to expect and its (on-board) sensors will compare that to the real world. To date, the worst accident involved a Google car getting rear-ended. In fact, Google cites that 90 percent of accidents involve human error.

As we always say, any good invention goes through a myriad of revisions throughout the inventing process and the Google self-driving car is no different. As time goes on, issues like the high cost of technology, its sensitivity to hackers who could reprogram a car’s route and serious weather among others all raise design and development concerns that need to be addressed.

At any rate, this is invention is driving invention. Here is a quick video of Google’s self-driving vehicle in motion: