Get the ‘Skinny’ on the Latest iPhone Rumor

Rumors have been swirling around the idea that Apple is currently working on a new app called “Healthbook.”

It all began in February when Apple posted a job listing for a physiologist that intimated the tech giant might be exploring health apps or gadgets.

This leads us to the most current news about Apple’s latest invention, which might be bringing fitness and health tracking capabilities to the forefront on future versions of the iPad and iPhone. It’s speculated that the latest update will debut with iOS 8 sometime later this year. 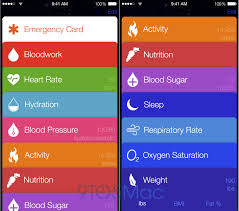 Much like the Passbook app that was developed by Apple, which offers a centralized location for your plane tickets, coupons, gift certificates and other passes, the Healthbook will offer a unified location for the user’s health and fitness information.

How will this new app track your wellness? For certain areas, it will utilize the new M7 chip. This technology was introduced with the iPhone 5s last year for the motion-detecting processor capabilities that are embedded inside the device. For the new app, the M7 chip will help track things such as the number of steps that you take during the course of your day, or the speed as you run.

New inventions go through a slew of changes as the process gets more involved. For instance, in the case of the Healthbook, for categories like “Respiratory Rate” and “Blood Sugar” as shown in the mock-up, these info-gathering processes would require separate devices. Does this mean that, in addition, Apple also is working on a device(s) that could perform these additional tasks?

If this isn’t the case, it’s likely that Healthbook will sync with many existing third-party devices.

You know what they say, an Apple a day keeps the doctor away and we think that Apple’s latest health invention might offer the help that consumers need!