The “Henry Ford of Inventing” has the (Keystone) Edge!

What better way to end 2012 than by, yet again, being referred to as “the Henry Ford of inventing?”  That’s precisely what Keystone Edge, an online publication that covers the entrepreneurial ecosystem that drives Pennsylvania forward, has called our CEO and founder, Mr. Davison!

Recently, George Davison was featured on the site’s “Founders” section.  Among comparing him to Henry Ford, deeming the title “a praise that should not be viewed lightly,” Keystone Edge also called Mr. Davison “one heckuva entrepreneur.”

Further, the site goes on to highlight Inventionland and acknowledges that it “has been cited by the Pittsburgh Post-Gazette as one of the city’s best [companies] for which to work.”

Also included is an interview with Mr. Davison, where he covers his inspiration, biggest challenge and what’s next for Davison! 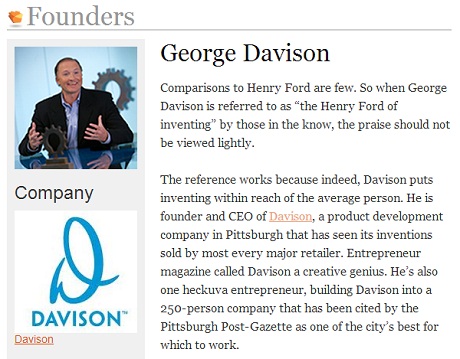