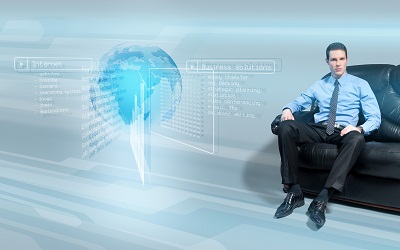 People have been dreaming about it since Princess Leia pleaded for Obi-Wan Kenobi’s help, “You’re my only hope.” The hologram is a part of science-fiction history that may be a lot closer to reality than you’d think!

Dr. Roel Vertegaal of Queen’s University’s School of Computing in Kingston, Ontario, is on the cutting edge of hologram technology:

“The technology Dr. Vertegaal and researchers at the Queen’s Human Media Lab have developed is called TeleHuman — and while it’s bulky, it works. All you need is a six-foot tall glass tube with a convex mirror inside, and a 3D projector. Two people simply stand in front of their own life-size cylindrical pods and talks to a 3D hologram-like images of each other. Cameras capture and track 3D video and convert it into the life-size image – although for the full effect you need several 3D cameras to capture both back and front of each speaker. Since the 3D video image is visible 360 degrees around the Pod, the person can walk around it to see the other person’s side or back,” according to an article on the Daily Mail Online.

Hologram technology is not as new as you may think — or at least a semblance of this technology. In 1991, Sega released an arcade game called Hologram Time Traveler. The cabinet for the game was about the size of an open MRI, the gameplay was wonky and the object of the main character was unclear to say the least. But, it looked awesome, especially to an 11-year-old forced to go to dinner with his parents. Check out a video of it here.

In 2012, hologram technology (maybe not hologram) brought Tupac back to life for the crowd at the Coachella festival by Digital Domain, which is now bankrupt.

So, is hologram technology even feasible or marketable? According to an article on squidoo, quite possibly. “While in its earliest stages of development, holographic TV is a technology that is being given serious attention from Japanese technology companies, of whom are hoping to have the technology hit the consumer market by the year 2020.

“In 2008, researchers at the University of Arizona were able to develop a breakthrough technology: the creation of an updateable 3D display. While this particular display could only be updated after several minutes, there is now hope that it can be further developed to eventually fulfill the need of updating that image several times per second — a feat that would be required for holographic TV.”

So while we are not quite on the holodeck of the Starship Enterprise, the technology required to give us an excuse to dress up like Obi Wan and communicate with other holograms might not be that far away.