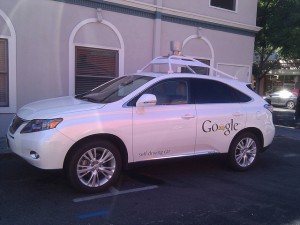 Humanity pines for flying cars. Science fiction has inundated us with the prospect of automobile technology taking us from driving down the street one minute and flying off to grandma’s house the next. But we’re failing to realize that we’re skipping a huge, more practical step in car technology – the self-driving car.

“Cars that can drive themselves, a staple of science-fiction, have started to appear on roads in real life. Google’s self-driving vehicles are the best-known, but most carmakers are also developing them. In 2011 BMW sent a robotic car at motorway speeds from Munich, the German carmaker’s hometown, to Nuremberg, about 170km away (with a driver on board just in case). Audi got a self-driving TTS Coupe to negotiate 156 tight curves along nearly 20km of paved and dirt road on Colorado’s Pikes Peak, with nobody behind the wheel. Proponents say that driverless cars would reduce road deaths, ease congestion, reduce fuel consumption, improve the mobility of old and disabled people and free up time spent commuting.” – The Economist

The benefits of self-driving cars go far beyond the pleasure of telling your friends “look, no hands.” Self-driving cars would give our nation’s disabled citizens the freedom to travel with ease. One would have to assume that drunk-driving accidents would flat-line, and these cars would grant a society hell bent on multi-tasking the freedom to do work, watch “Game of Thrones” and even discipline the kids without having to hold onto to a wheel and watch the road.

How does a self-driving car work?

According to the article from The Economist:

“In many ways self-driving cars are a logical extension of existing driver aids such as lane-keeping systems (which follow road markings and sound a warning and correct the steering if a vehicle starts to drift out of its lane), adaptive cruise control (which maintains a constant distance from the vehicle in front, rather than a constant speed), auto-parking systems (which can reverse a car into a parking space), emergency braking (which slams on the brakes if an obstacle, another vehicle or a pedestrian is detected in front of the car) and satellite-navigation systems. Computerized control of a car’s steering, acceleration and braking is already possible under some circumstances, in other words. For a car to drive itself, these systems must all be tied together using software, and supplemented with a set of sensors so that the software can tell what is going on around the vehicle.

“Accordingly, today’s self-driving cars are covered with sensors. Mapping nearby features, spotting road edges and lane markings, reading signs and traffic lights and identifying pedestrians is done using a combination of cameras, radar and lidar (which works like radar, but with pulses of light rather than radio waves). Ultrasonic detectors provide more accurate mapping of the surroundings at short range, for example when parking. Gyroscopes, accelerometers and altimeters provide more accurate positioning than is possible using global-positioning system (GPS) satellites alone. Google’s cars scan their surroundings to build a detailed 3D map of features such as road edges, signs, guard-rails and overpasses. Each time a car follows a particular route, it collects more data to update the 3D map.” 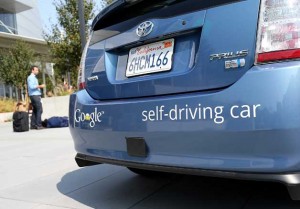 So don’t hold your breath for flying through your neighborhood and coming to an even more awkward 4-way, mid-air stop sign. The immediate future has more practical plans in store for automobiles.