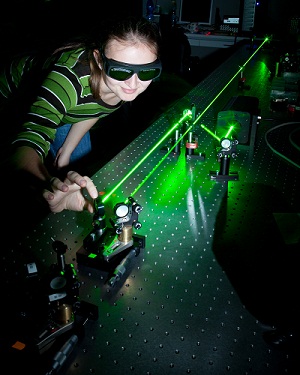 They’ve existed in our collective geek dreams since the dawn of science fiction. Handheld weapons, much like pistols, Tasers or Super Soakers that have the ability to quash our foes in a barrage of highly focused light beams, leaving behind only a singed carcass and smoke. It’s been said that Archimedes used mirrors to concentrate the Sun’s rays into a death ray 200 years BCE. So, if a mathematician from 2,000 years ago could build such a weapon, why don’t we have a death ray, a laser canon or a photon gun?

The events of April 8, 2013, during which a Naval laser turned a drone into a ball of fire, prove we are closer to harnessing this technology than we previously thought. According to the Washington Post, “The Web and the defense community are abuzz over a video of the U.S. Navy’s new laser weapon system (LaWs), which shows a destroyer-mounted laser dramatically shooting a drone out of the sky.”

This type of laser, which Admiral Jonathan Greenert debuted during the Navy’s annual conference in D.C. today [April 8], has been heralded by a congressional report as a ‘game changer … comparable to the advent of shipboard missiles in the 1950’s. Per the Navy’s Office of Information, it is hoped that the system will work especially well against small boats and aerial targets. The technology also has big cost implications, Bloomberg reports: Each shot is estimated to cost about $1, versus the much higher price tag for individual missiles.

The most interesting thing about the new system might be its next port of call. Next year, the system is headed for the Persian Gulf with the USS Ponce, a transport ship recently retrofitted as a staging base. And as Spencer Ackerman points out at Wired, that proximity to Iran doesn’t seem like coincidence.

But, don’t dig your Starfleet emblem out of your closet to celebrate U.S. global laser domination just yet. “The Navy won’t say just how many kilowatts of energy the LaWS’ beam is, but it’s probably under the 100 kilowatts generally considered militarily mature. The fact that LaWS can kill a surveillance drone and a fast-attack boat has more to do with the vulnerabilities of those systems than it its own prowess. It cannot stop an anti-ship missile, and its beam, about the circumference of a dime, will do little more than singe a fighter jet. And there remain significant challenges with cooling a shipboard high-energy laser, a necessary safety feature,” according to Wired.

So, while most of us will never get to fire a laser the magnitude of the Navy’s, maybe some day we’ll get a chance to try out this handheld laser canon from BAE. Here’s hoping!