Google Glass looks toward the future – for better or worse

Like the interactive glass from Tom Cruise’s blockbuster “Minority Report,” the newest product from Google – Google Glass – offers customers information presented right before their eyes on a pair of glasses.

The future is here. Or is it? Google Glass could be as successful as something like the iPhone or as big of a bomb as the Segway. Only time will tell, but pundits are already weighing in. Currently only a chosen few have been allowed to buy Glass:

In February, Google launched a contest inviting U.S. residents to submit applications detailing how they’d use Glass for a chance to join Google’s Explorer Program. Glass Explorers would be able to buy an early version of Glass for $1,500, months before the product’s forthcoming release to the public at large. General sales for Glass are expected to start in late 2013 or early 2014.

So how does Glass work? According to The Verge:

Glass’ basic paradigm is one of a ‘timeline’ full of ‘cards.’ Each card, when tapped, can reveal more cards, or present actions like ‘reply’ or ‘delete.’ Some cards can be ‘pinned,’ which places them to the left of the home screen. Otherwise, cards are sorted chronologically to the right of the home screen.

While Glass’ best known interaction method is the verbal “Okay, Glass” prompt, most of the UI can only be operated by swipes and taps. Outside of the homescreen, the only time you’ll be speaking is when you’re composing a text reply to a card in your timeline (like an email message, or a tweet). While voice might seem like a gimmick, it’s actually preferable to the hypersensitive touchpad at times — we’ve accidentally tapped to share a photo with the wrong Google+ contact a dozen times, simply because Glass registers a tap instead of a swipe. At least when you’re talking you get a chance to cancel the action if you’re misheard.

Glass’ very simplicity means there’s actually a steep learning curve: You have to use Glass how Google wants you to use Glass, or it just doesn’t work. Also, you have to be really good at swiping and tapping.

Sounds interesting, but not everybody is a fan. A recent Forbes article expounded on what Google needs to do better if Glass is ever going to take off, including:

The Glass camera lacks basic camera functionality. People are used to cameras on smartphone constantly improving. Glass bucks this trend. There are no settings of any kind and no live preview, so each shot is composed blindly. “After using Glass for the past few days now and taking hundreds of photos, I’ve gotten used to it,” writes Chris Chavez of Phandroid. “The camera shoots at a downward angle meaning you point your nose at what you want in the center (if that makes sense).” It does, but only if you are particular kind of gadget-loving masochist.

Given Glass’s limitations it seems like it’s only a matter of time before Google either releases a radically improved version of the product, or the hype plays itself out and Glass becomes a victim of its marketing success. Will Glass go down in history as one of the decade’s most innovative products or one of its biggest marketing flops? Today, either outcome seems equally possible. 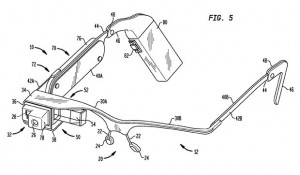 As with most inventions in the tech world, the early versions tend to be the roughest around the edges.  As research is done and feedback from the industry starts to come in, changes are made and the product usually improves.  If you take a moment and look at the first version of the iPod and how ancient it may seem now, that same advancement that Apple has made could also be the road Google takes with Glass.  Color choices, partnering with titans of the glasses industry (Ray Ban, Oakley and others) and improving battery life are not too far away.

Google Glass might have early limitations but the idea is there and that should make anyone excited about what the future might hold.