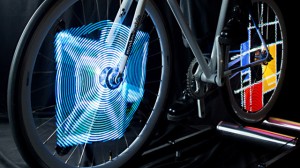 Companies like Nite Ize, MonkeyLectric and Revolights market LED lights that turn your bike wheels into glowing images of your choice.

The white-and-red lighting setup comprises a ring of LEDs that you install around the entire edge of each of your bike rims. Using a pair of clever devices, only the forward-facing lights (or backwards, in the case of the rear wheel) illuminate when the wheel spins. The result is beautiful arcs of light that make you visible from all angles, an effect that Revolights’ co-founder and CFO Adam Pettler says came by accident.

Check out how bike LEDs work in this video.

So what is the future of LED bike wheel utility? Certainly advertising agencies have seen the eye-catching value of promoting a product on a glowing bike.  Anvil.com, for example offers LEDs featuring Pepsi and Coke logos.

Most wheel LEDs only turn on at night, are easily installed and are waterproof. Here’s how a company called Mathmos describes their lights:

Easily screw directly onto your bike wheel valves and create circles of light when you cycle. The lights use high quality LEDs with light/motion sensors, which mean they will only come on at night when you’re on the move. They are great fun lights but also aid visibility and therefore safety. They should only be used in conjunction with standard bicycle lights and not on their own.

If you love the idea but aren’t interested in paying for LEDs for your bike wheels, Gizmodo shows you how to create your own here.