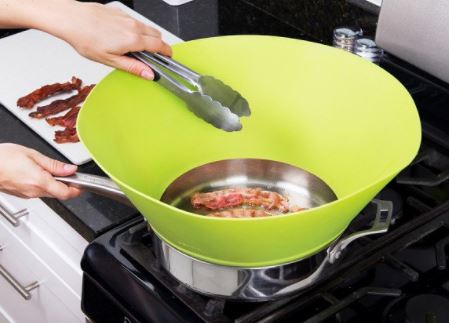 Whether you’re a culinary chef ready to create your next masterpiece or an average Joe looking to make yourself some breakfast, it’s safe to say that we all face similar problems when cooking on a stove top.

Sizzling bacon, oily vegetables, fried chicken, bubbling doughnuts…what do they all have in common? It won’t take long to figure it out when you look at your countertop and realize the mess you’ve made. That’s right, oil and grease.

Yair Reiner, founder of Gowanus Kitchen Lab, was tired of the mess left behind from cooking his favorite dishes. Frying oil splatters everywhere, creating a sticky film on nearly everything, not to mention the potential burns people face with that one rough pop of bacon.

In 2015, Reiner was working at a restaurant in New York, cooking one of his favorite dishes. While pan frying duck breast, Reiner grew more and more frustrated by the amount of grease and oil that coated his countertop. He was certain he could come up with a better way to help limit the mess.

Using some basic silicone ingredients he bought online, Reiner got to work building his first prototype. After testing it first-hand, he was shocked by how well his funnel-designed cone, called the Frywall, worked at keeping oil off the countertop while still allowing him to utilize the entire pan.

By creating a funnel that rests on the rim of the pan, Reiner invented a solution that was not yet on the market. Similar solutions were merely screens that would keep the oil in the pan while cooking, but as soon as it was time to add new ingredients and take the screen off…well, you can figure out what would happen.

To date, the Frywall has been featured on over 30 different food networks and infomercials, helping keep kitchens clean and cooks safe.