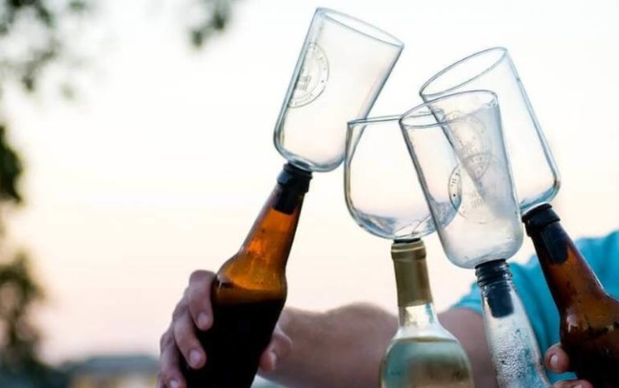 Jennifer Sullivan, mother of two, was enjoying a rare moment of downtime and watching one of her favorite shows, Cougar Town. In this episode, two women were talking about wine and how uncorking the bottle is always the most dreadful part.  In the episode, one of the women took out a device which she screwed on to the top of the wine bottle, turning the bottle itself into a wine glass.

Awestricken by the device, Sullivan turned to the internet to find one for herself. To her surprise, the ‘invention’ didn’t actually exist. Beaming with excitement, Sullivan phoned her brother-in-law who also shares a love for wine. The two began brainstorming different ways they could make this product become available to the public.

After setting up a website and working out a deal with a manufacturer, Sullivan and her brother-in-law, Randy Rothfus, began selling the Guzzle Buddy – a one-size-fits-all wine bottle topper.

Thanks to viral videos and the internet, the Guzzle Buddy grew in popularity – eventually finding its way to The Ellen DeGeneres Show and became a featured gift idea in several magazine articles. Made using borosilicate glass and silicone, the Guzzle Buddy easily screws into most standard-sized wine bottles, creating a great gag-gift and conversation piece at parties.

Although popular, Sullivan and Rothfus were constantly faced with the question, “Why not just drink from the bottle?” In an effort to combat the negative stigma around their product, the two began researching. It wasn’t long before they found an answer.

As stated on the Guzzle Buddy website, “Researchers suggest that when we taste something, as much as 80 percent can be attributed to the smell.” Drinking directly from the bottle doesn’t allow appreciation of the smell of the wine or beer. While using the Guzzle Buddy, however, “liquid streams down the inside of the glass allowing the carbonated bubbles to burst releasing those wonderful aromas that you inhale.”

Today, the Guzzle Buddy remains one of the most popular wine-related gift items on the market today. The company has even begun to branch out, creating beer soda bottle toppers as well. Remember, just because you see it on television doesn’t mean it exists.