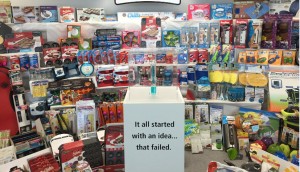 The idea of “Fail your way forward” hits close to home here at Davison, but in a good way. Keep reading to learn more.

“Fail your way forward.” It may sound counterproductive, because failure often carries a negative connotation. In reality, failure doesn’t mean the end; failure means the beginning of something new.

It all began in 1986 when Davison, like many people, had an idea for a product. His product was one that would prevent toothbrush germs from spreading and getting everyone in his family sick.

After two years of hard work and spending nearly every dime to his name to bring his idea to life, a major corporation beat him to the market with his idea. 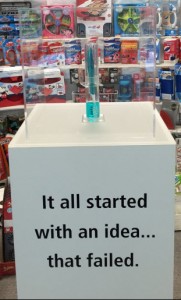 This is a moment that could have stifled anyone’s dreams. And though this is what some would characterize as a failure, for Mr. Davison, he used this as ammunition to “fail forward.” How? Because it got Mr. Davison thinking, “Why didn’t other idea people have access to a similar process; an affordable idea-to-product method like the one major corporations used?”

For Mr. Davison, he saw a need and since necessity is the mother of all invention, he needed everything under one roof to invent his products in a timely, efficient and cost-effective manner.

He knew there was a better way to compete; after all, inventions are made because they provide solutions to problems.

From this idea, a new method that would benefit future generations of idea people was born. This idea didn’t develop overnight; it took years of experimentation to figure out the best means to affordably transform ideas into products.

On his journey, Mr. Davison experienced his fair share of failures and successes that led him to the best approach. Over time, he found a method that worked.

After two decades of hard work, Mr. Davison developed an invention method that would forever change how product ideas became actual products. It’s this method that dubbed Mr. Davison as a “Creative Genius” by Entrepreneur Magazine.

Mr. Davison has shared his inventing method with us and he wants to share another piece of invaluable advice with fellow idea people:

“If you’re going to be an inventor and you have an idea that you want to get out there to the world, I would stress to you to think very carefully about your chances, as a first-time of doing everything right is pretty hard. By the way, that was me many years ago. Before I started this company, I was in my early twenties and naïve; I thought I could and unfortunately I failed miserably… It took me many years to develop a skillset and to be able to build systems, so that we could actually invent affordably and achieve the outcome we were looking for.”

If you’re ready to chase after your inventing dreams with the Davison Inventing Method, submit your invention idea today!

The typical Davison client project does not result in a license, sales in stores or profit to the inventor.