The frigid winter temperatures are now becoming a repressed memory as we slowly, but surely take baby steps toward warm weather.

With the summer months right around the corner, people will begin to crave something cold to cool them off in the hot temperatures. Sometimes, all that you need is an ice-cold drink to leave you feeling refreshed. You can credit the feeling of pure joy when that icy drink hits your lips to John Gorrie, who invented the ice machine.

As the story goes, it was July 14, 1847 and the weather in Apalachicola, Florida was muggy. The stores of ice from the north had run out and the French consul Monsieur Rosan was celebrating Bastille Day. The guests began to fear that a dreadfully uncomfortable afternoon was on the horizon.

A local doctor began to further complain about not wanting to drink warm wine. So, Monsieur Rosan announced that “France gave her citizens what they wanted; Rosan gives his guests what they want, cool wines! Even if it demands a miracle!” After a short period of time, the waiters entered the room with large silver trays filled with bottles of champagne on ice. 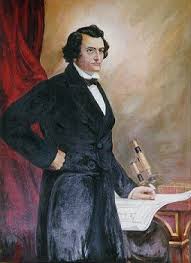 People began to wonder where on earth the ice could have come from. The fact of the matter was that the ice was created right in Florida. One of the guests declared, “Let us drink to the man who made the ice, Dr. Gorrie.”

Dr. John Gorrie, a local physician, had spent more than five years working with a mechanical refrigeration machine. This contraption had the ability to make both ice and cool air. For years, he used it in his infirmary to make his fever patients more comfortable.

Gorrie was an early pioneer of the invention of the artificial manufacturer of ice, refrigeration and air conditioning. Following in the footsteps of earlier experiments in refrigeration like those of William Culle in 1748, Oliver Evans in 1805 and Jacob Perkins in 1834, Gorrie successfully designed, patented and built a prototype of his ice making machine.

Now, Gorrie’s original invention design was more than twice the size of the refrigerator you may have in your kitchen; however, the characteristics of the invention itself were pretty much the same. Much like modern air conditioners, refrigerators and freezers, the production of ice relies on what‘s known as “vapor compressions refrigeration.” 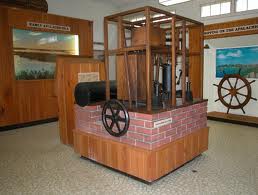 The process can be explained as such; if the air were highly compressed, it would then heat up by the energy of compression. If this compressed air were run through metal pipes cooled with water, and if this air cooled to the water temperature was expanded down to atmospheric pressure again, very low temperatures could be attained, even low enough to freeze water in pans in a refrigeration box.

Today, ice makers do much of the same thing and use chemical refrigerants (Freon) as the gas that cycles through the four-part system, which is comprised of the evaporator, condenser, compressor and expansion or throttle valve.

Basically, the entire process relies on the natural properties of the refrigerant in order to extract or release heat as it changes between liquid and vapor states, which depend on the pressure that is exerted by the system.

Thanks to Dr. John Gorrie and his ice-making invention, we can now enjoy a refreshingly cold iced drink in those warm summer months!