Watch TEDTalks:  Smart people will distill their life’s work down to 20 minutes for you.

This is advice from David Eagleman, neuroscientist, New York Times bestselling author and, himself, a TED Fellow.  TEDTalks actually started back in 1984, just two years before George Davison started work on his toothbrush sanitizer that, ultimately, led him to found Davison Design.  [TEDTalks] brought together people from three worlds: Technology, Entertainment and Design. They were started by Richard Saul Wurman, who, at the time, saw a convergence between the three fields.  Originally, the talks were heavy on technology and design, evidence of its Silicon Valley roots.  Today, the talks span the worlds of science, medicine, art, design, invention, transportation, music… the list goes on and on. 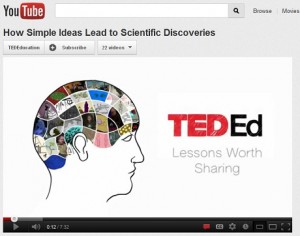 Recently, Adam Savage, of Mythbusters fame, gave a talk entitled, How Simple Ideas Lead to Scientific Discoveries, in which he discusses some of the most important scientific discoveries of all time and how they were arrived at through simple, creative methods that anyone could have followed.  Let’s start at the beginning or at least the beginning of simple solutions being posited as the most effective ones.  In [a] 14th century England town called Occam, lived a logician Franciscan friar named William, who has most commonly become associated with the law of parsimony.  He wrote the following: 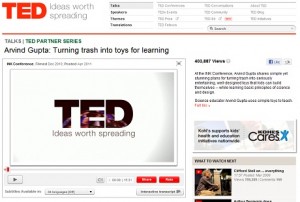 What it boils down to is: other things being equal, a simpler explanation is better than a more complex one.  And, sometimes, that’s just what the problem calls for.  In Arvind Gupta’s TEDTalk, Turning Trash into Toys for Learning, which I recommend watching, he demonstrates how the problem of providing educational experiments for children in developing countries [could] be solved with trash and things found around the house:  rubber tubing, matchsticks, drinking straws, stick pins, bicycle tubes, even a pencil.  Simple items can be used to teach scientific principals, physics or mechanics.

TEDTalks continue to be a driving force for creative thinking in innumerable fields. Their over 1,000 videos have been translated to 86 languages, with another seven in [progress].  They can be viewed for free at any time throughout the world, on any number of mediums:  the TED website, YouTube, iPhone or iPad, or any Android/Google device.

Maybe you’ll find inspiration for a simple idea that can change the world.