Cooking up a Summer Invention

With Memorial Day weekend right around the corner, we can’t help but think of the many activities that will take place! From remembering those brave men and women who made the ultimate sacrifice for our country to quality time spent with family and friends, this unofficial start of summer is always a weekend to remember.

This three-day weekend is the perfect time for people to get outside and cook up some deliciously juicy burgers and hot dogs on the grill. 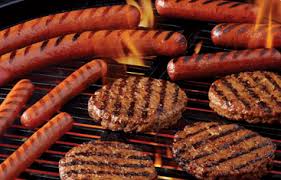 The roots of American grilling are entangled in life after World War II. When the soldiers returned home, many lived in small bungalows with small backyards. From that point on, all that they wanted was peace and quiet and a place to unwind and relax; thus, the backyard became sacred territory. At first, simple free-standing metal braziers began to replace the traditional barbecue pit. Then, the way food was cooked shifted from slow-cooking techniques to grilling, which as we know, entails cooking meat over high heat.

All inventions go through rounds of varying ideas until the final product can come to fruition and this was exactly the case when it came to the grill. George Stephen was a father with a growing family and enjoyed the taste of grilled steak; however, he struggled with his flat, open brazier. So, rather than continue fighting, he decided to take matters into his own hands and come up with a better way to grill.

Would you believe us if we told you the first gas grill was actually made from a buoy that was cut in half? Although this may not sound like the safest mode of grilling, the invention idea for the grill was born from a buoy! 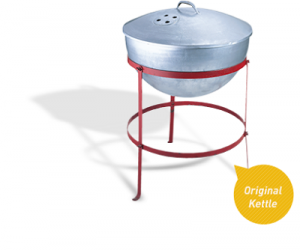 It all began in 1952, when George Stephen was working at Weber Brothers Metal Works in Chicago, Illinois. At the time, Stephen was working on marine buoys for the Coast Guard when he came up with the invention idea for a better way to grill. His invention was a dome-shaped grill that was equipped with a lid that would protect the cooking food from the elements and seal in the barbecue flavor. The buoy was cut in half and Stephen added air vents, three legs to the bottom and a handle on top of the prototype. Eventually, he cooked up an invention that we know and love today, the grill. 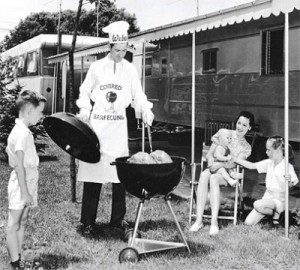 For over 60 years, one man’s passion for grilling has turned into an invention that is a staple of most households around the world. In fact, today, Weber grills in particular are sold in more than 72 countries!

So, this weekend as you fire up your gas grill, just think that Stephen’s invention that started in a marine buoy is still helping to keep your bellies full and your grilling dreams afloat!