What have puppy style, keep pets paws warm in harsh weather conditions, were designed for one of our clients and have received awesome amounts of press since their 2010 market debut?  Well, if you guessed anything other than Pugz Shoes for Dogs, we suggest you go back and read some old blog articles to catch up on these hot items!

We’re happy to announce that the adorable Davison-designed doggie boots are back in the press!  This time, Pugz were featured on none other than CNBC, as part of their Small Business section! 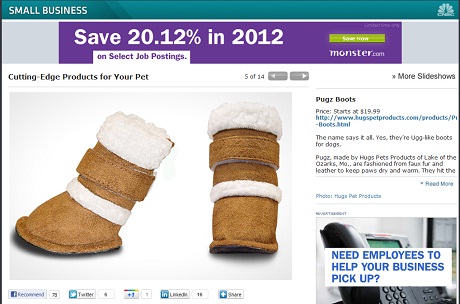 The article, titled “Cutting Edge Products for your Pet” showcased the faux-fur and faux-leather boots alongside several other innovative pet products, like a zebra-printed doggie pillow, canine cupcakes and a stylish puppy quilted puffer coat!

Including a photo of the booties, a link to the Hugs Pet Products website and a short write-up on Pugz, the CNBC article deems the shoes “one of Hug’s best-selling products” and a big hit over the 2011 holiday season. 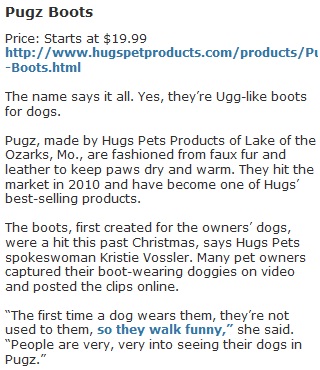 “The first time a dog wears them, they’re not used to them, so they walk funny,” Vossler said. “People are very, very into seeing their dogs in Pugz.”

And, we are very, very into seeing Davison designs making the news!  See the CNBC article for yourself here!

In conjunction with Hugs Pet Products, who licensed Pugz, our newly-released Dare to Invent webisode series and our social media campaigns, we’re giving away a free pair of Pugz on Facebook!  After you watch the latest episode, head on over to our Facebook page for details on how to win a pair for your four-legged friend!

A typical client project is not licensed, sold in stores or profitable.