Client’s Bakeware Invention on the Market and Headed to QVC! 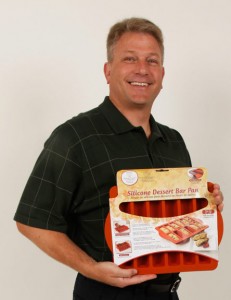 The good news about the Silicone Dessert Bar Pan, which we developed for our client, Joseph, just keeps coming in. The manufacturer reported that the pan is “selling very well at retail.” The product will be featured on QVC in October, and it is already in a “full roll out” at Hobby Lobby, Kitchen Collections, Brylane Home, Miles Kimball, Bimart and it was just picked up by Bed, Bath & Beyond! Versions of the pan for holiday-themed treats are also in the works for next year — And to think it all started with a husband who likes chewy brownies!

Inventor’s Story:
Joseph has always loved brownies with a chewy edge, so much so that he used to slice a pan of brownies before it was finished baking so all the squares would have edges. His wife did not appreciate that and told him so. “She yelled at me,” he recalls, laughing.

The EMS pilot wondered if he could invent an “all edge” brownie pan to keep peace in the family and give him a whole pan full of chewy brownies. He first came up with the idea about 20 years ago when he was a helicopter pilot in the Marine Corps. A fellow Marine and friend had spent a “huge amount of money” patenting a new product idea, however, so Joseph didn’t think developing his was an option. He thought that was just the way it was done.

“I really didn’t have any desire (to pursue it) because of what I perceived about the cost,” he said. Several years later, however, he submitted his idea to Davison, and the work began. “They did some modifications to my pan design which I actually thought was an improvement.”

In October, his product will air on QVC, the nation’s most popular home shopping network. In addition, the manufacturer is expanding the product to an entire line of silicone bakeware for holiday-themed treats, including pans for Valentine’s Day and Easter, which will hit the stores in early 2011! Variations for Halloween, Thanksgiving and Christmas are also in the works.

During the design process, the product evolved from a metal pan to silicone bakeware that remains cool to the touch and bends for easy removal of items after baking; a rigid frame molded into the perimeter makes the pan safe to carry. The 12 candy-bar shaped molds can be filled with brownie batter, Rice Krispie treats, cookie dough, and more – and all the treats come out with four chewy edges.

It took about three years to find a manufacturer, but the first-time inventor decided to keep going, despite the setbacks.

“It is an emotional roller coaster; up and down,” said Joseph, who can’t wait to see his product on national TV.

“Joseph had his share of struggles along the way, but he never gave up,” said George Davison. “We couldn’t be happier for him and his family.”

Joseph’s father, also a Marine veteran, thought he was a bit foolish for pursuing and investing in his idea over the years; then his son gave him a box from Davison with his packaged product inside.

Joseph recalls, “When he saw the pan and after I told him it would be in stores and on QVC he was quite surprised, and he did change his tone!”

The client has not realized a net profit on his product.