It has been said that “necessity is the mother of invention” and nothing could be truer for first grade teacher turned inventor, Eileen Sloan. Sloan’s invention story began in the classroom where she spent what seemed like endless hours helping her students tie their shoes. 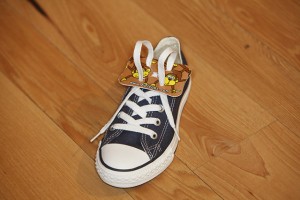 Thanks to the success of her invention, EZLeaps, that classroom is also where her teaching career ended and her entrepreneurial dreams began. In a recent article on fastcompany.com, Sloan shared the story of the thin, plastic invention that not only changed her life, but continues to change the lives of countless children around the world as they learn to tie their shoes.

According to the article, Sloan began the invention journey that led to EZLeaps using her morning coffee leftovers.

“Sloan began with a prototype she created from a plastic coffee can lid, with holes punched in it to thread laces through. This little bit of hardware allowed the kids to pause mid-tie, keeping the laces from wriggling away as they attempted to tie the loops together.

Soon, her students were adding stickers to personalize their plastic lids, and getting far more excited about learning to tie their shoes than ever before,” reported Shaunacy Ferro of fastcompany.com.

Sloan’s classroom success led to her early retirement when she founded a company to produce EZLeaps in 2012. Because, as we know, there is always a better way to do something, Sloan’s plastic invention underwent several design changes before reaching its current sleek, credit-card-like appearance.

“In an important departure for the first on-the-fly prototype, the holes are arranged so the product can pop off the shoe once the laces are tied,” reported Ferro. “The colorful piece of plastic is cheap and low-tech, so parents need not worry that their kid will drop it on the playground, and the cartoony set of designs seem perfectly tailored to get kids to beg and barter to collect them all.” 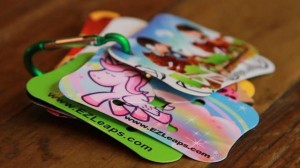 Now, the first grade teacher turned inventor, who combined her book smarts and street smarts to invent an impactful children’s learning tool, estimates that EZLeaps have helped thousands of children learn to tie their shoes in merely a couple of days.

EZLeaps are available in various child-friendly designs and they retail for $5.49 each. Read more about Sloan and the inspirational story behind her inventive classroom creation at fastcompany.com.