Announcing the fourth winner of our giveaway! 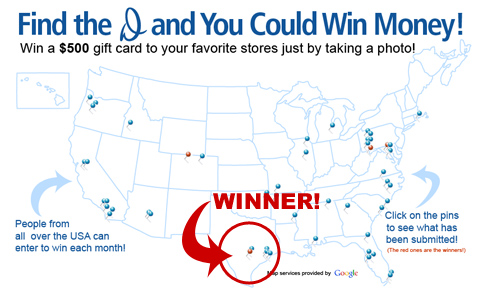 Carl, from Lago Vista, TX., is the fourth winner in our “Find the ‘D’ and You Could Win Money” giveaway! He was extremely pleased to get the good news that he was the randomly chosen winner among those who entered in September.

“My goodness — that’s cool!” said Carl. A client of Davison, he heard about the contest through Daniel, his director of new products. “Oh man, he’s great,” said Carl of Dan. His project is in the Licensing stage, so he has interacted with several Davison employees. “Everyone there has been fantastic,” Carl said. “They know how to take care of people and they never give me any double talk, so I am pretty well pleased with them.”

Carl, who served his country for over 20 years in the Air Force, also thinks the Davison giveaway is pretty neat. He will be receiving a $500 gift card to Walmart and plans to spend it on groceries and other necessities.

“I think it’s great,” he said. “In these days and ages, we can take every penny we can get!”

While retired, Carl drove a school bus until he broke the bones in his wrist, and he’s also been caring for his wife through a serious illness. Despite all that, Dan described his client as very enthusiastic, upbeat and polite.

“He was always very energetic, a very caring guy,” said Dan, who took over the file shortly before it went to Licensing. “He was excited each time I talked to him.” When Dan told him about the contest, Carl said, “Hey, you never know – I’ll take a shot at it!”

“It’s pretty satisfying for him to win,” Dan said. “Someone deserving like that, to have him win, and a portion also going to cancer research, that’s really great.”