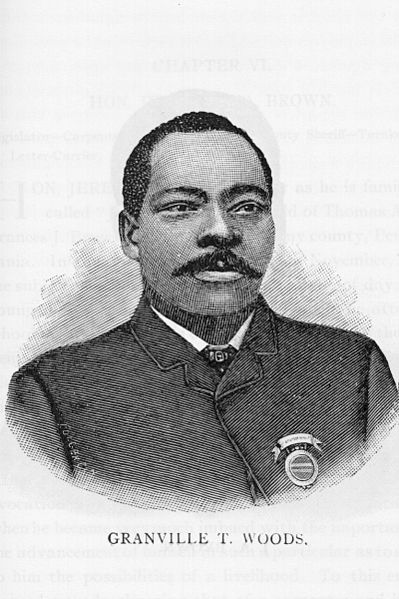 We could think of no better way to celebrate Black History Month than to feature African American inventors, such as Granville Woods, who changed history, and without whom our lives would be drastically different today. Many people may have never heard of Granville Woods, but he and his inventions had a profound impact on all of our lives.

A self-educated man, Woods taught himself mechanical and electrical engineering and became a successful inventor, holding more than 50 patents.  He is considered to be one of the ten most important African American inventors of all time, and was so prolific that he has often been compared to Thomas Edison. Probably his best known invention was a telegraph that allowed messages to be communicated from a moving train to a train station, allowing train engineers and station masters to know how close a train was to another, which greatly reduced accidents and collisions between trains.

Woods was born in 1856 in Columbus, Ohio and attended school until he was about 10 years old.  Forced to quit school so he could get a job, he became an apprentice in a machine shop and learned the trades of machinist and blacksmith while repairing railroad equipment and machinery. He developed a fascination for the electricity that powered the machinery, and spent the next few years learning everything he could about electrical engines and all of the other machinery used in railroads.  He also took as many night school courses in mechanics as he could afford, and would encourage his fellow workers to teach him everything they knew. Ultimately, this love of railroad and electrical engines would lead to him to creating a variety of inventions relating to the railroad industry.

One of his first inventions was a device which essentially was a combination of a telephone and a telegraph that allowed a telegraph station to send voice and telegraph messages over a single wire. Woods filed for a patent for his “telegraphony” in 1885 and later sold the rights to this device to Alexander Graham Bell’s company The American Bell Telephone Company.  The money he made on that deal enabled him to become a full-time inventor.

In 1887, he patented the Synchronous Multiplex Railway Telegraph, which allowed communications between train stations and moving trains, and resulted in a huge improvement in rail safety. Surprisingly, Thomas Edison sued Woods, saying that he had created a similar telegraph first and that he was entitled to the patent for the device. The courts sided with Woods, so Edison sued him again. After losing again, the story goes that Edison decided it would be better to have Woods work for him than against him, and offered Woods a prominent position in the engineering department of the Edison Electric Light Company. Woods turned him down.

By now, Granville Woods was becoming a well-known figure in the invention world, and he began to produce a string of inventions and patents. In 1887, in addition to his Multiplex telegraph, he also filed patent applications for a train’s electromagnetic brake apparatus.  In 1888, he manufactured a system of overhead electric conducting lines for railroads, upgraded tunnel construction for electric railways, created a galvanic battery, and made more improvement to railway telegraphy. In 1889, he filed a patent for an improvement to the steam-boiler furnace and automatic safety cut-outs for electric circuits.

In 1892, Woods used his knowledge of electrical systems in creating a method of supplying electricity to a train without any exposed wires or secondary batteries.  He devised a system where the track had a third rail with iron blocks spaced every 12 feet and electricity was passed to the train as it passed over these blocks.  Ironically, when he filed a patent for this “third rail” propulsion system, Thomas Edison had beaten him to it, holding a patent on a similar system ten years earlier.  So, though their paths crisscrossed several times in throughout thier lives, both Woods and Edison had a mutual respect for each other and a mutual love of inventing.