A Shot at History: Basketball

Kareem Abdul-Jabbar, Larry Bird, Wilt Chamberlain, Michael Jordan, Kobe Bryant; these are just a few of the people that the world may not know if it wasn’t for an idea that James Naismith came up with in 1891, when he invented the popular sport of basketball.

With the 68th season of the National Basketball Association (NBA) underway, we thought that we would take a look at the history of basketball, dating all the way back to its humble beginnings in Massachusetts. 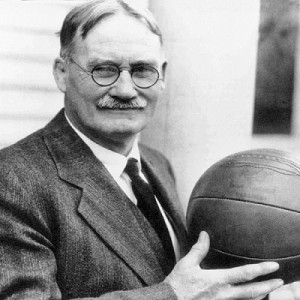 There are some people who enjoy the winter, while others find it to be nothing but a nuisance. James Naismith was one of those people who found winter to be nothing more than a hindrance to his athletic endeavors.  He found that the winter kept him from playing outdoors, which resulted in weight gain and loss of strength.

Naismith was born in the Ontario village of Almonte and made the move to Massachusetts to escape those long Ontario winter months. Even though winters are long and cold in Massachusetts, it was a definite improvement from Ontario.

As time progressed, Naismith became a physical education teacher at a small Christian college. Since he knew that winter in New England wasn’t much better than the winter in Ontario, he decided to look for a bright side.  This opportunity arose at the school where he was teaching.  There was an assembly hall with moveable benches and a hardwood floor that would eventually become the birthplace of his invention.

The blueprint for the game that we know today was designed during this time. Naismith created a game that was well-suited to the room’s high ceiling and rectangular floor plan. The original game combined characteristics of soccer, football and baseball, all of which supported and placed an emphasis on teamwork and friendly competition.

So, how were the sports previously listed infused in the original blueprint of the game? For starters, the ball that was used at the time was a regulation soccer ball that, instead of being kicked, was bounced or passed by hand, much like a football or baseball, from one end of the room to the other and was thrown into a peach basket that was hung at either end, thus giving birth to its name: basketball. Originally, basketball was played with nine members on each team. The idea of the game quickly spread throughout New England and eventually throughout the United States. By 1896, there were enough colleges that had formed their own basketball teams that the first extramural competition was held, but instead of nine players, each team had five.

Two years later, the first professional basketball league was created. Within the next few years, with Naismith’s approval, new rules were implemented to ensure that the game would be played in a friendly-competitive spirit. Among the new rules, the most important were those that defined what a foul or penalty was and gave the person that was fouled the opportunity to take possession of the ball or the chance to throw the ball without opposition. Additional rules included those that would help the speed of the game by incorporating a clock and not basing the game solely on the accumulation of points.

Here is a little fun fact: did you know that when the game of basketball was first played, players could only shoot the ball with two hands? It wasn’t until decades later that the rules allowed for players to shoot the ball with one hand. Could you imagine if this rule hadn’t been instituted and Kareem Abdul-Jabbar’s classic hook shot never existed? We couldn’t either! 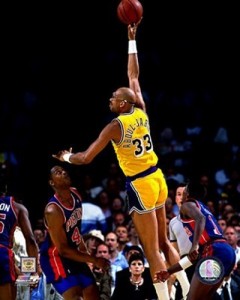 Innovation went hand-in-hand with the invention of the sport. For instance, the addition of nets to the basket allowed for the ball to fall through and be retrieved on the court rather than a referee or player having to climb a ladder in order to retrieve the ball from the wooden basket.

Other innovations included adding a backboard to the basket, which was added to keep fans of the defending team from interfering with the opposing team’s shot or, in 1901, allowing players to bounce the ball once; before that time, players couldn’t dribble the ball at all!

All of these additions and more gradually improved the game in its early stages and slowly became pieces of the puzzle of the sport that we know today. Now, basketball has become popular not only in America, but also around the world, attracting the most talented athletes as well as offering entertainment to fans and competition to players. From its humble beginnings in Massachusetts, the game of basketball that was invented by James Naismith back in 1891 continues to thrive from its inception of using nothing more than a soccer ball and peach basket.