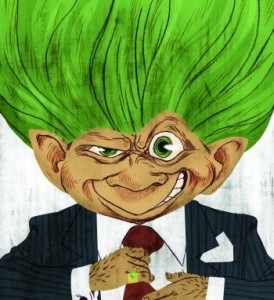 On October 1, we wrote a blog about patent trolls, otherwise known as NPEs (Non-practicing entities), which are companies that don’t make or sell anything; they solely own patents.

In an effort to thwart these patent trolls from buying patents for the sole purpose of frivolous lawsuits against unsuspecting businesses, the House Judiciary Committee Chairman, Rep. Bob Goodlatte (R-VA), introduced The Innovation Act of 2013, which is co-sponsored by the bipartisan coalition, in order to stop patent trolls.

This new act offers a multitude of proposed solutions to the ongoing problem of patent trolls. For those who crave innovation, if the patent trolls are not stopped in their tracks, they will continue to leave a sour taste in your mouth, because of their exploitation of the innovation economy.

Since 2005, there has been a 400 percent increase of lawsuits by patents trolls. In 2011, these reported costs were $29 billion that went towards stifling innovation. Patent trolls don’t just target small businesses; some are courageous enough to go after large companies and even city governments.

At Davison, we want to inform you about these patent trolls and how legislation is working to protect your right to innovate.

We encourage you to learn more about The Innovation Act of 2013 and how this bill can help stop the progress of patent trolls.