A Cleaner Way to Craft 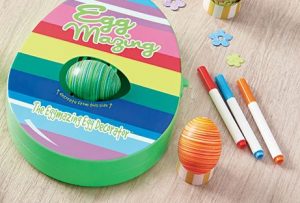 Coloring Easter eggs is a popular family tradition that has been passed down for generations. No matter what, it’s always a competition to see who can create the perfectly dyed egg and every child knows when they see the newspaper laid out, the cups full of dye, and the little wire egg holders, it’s game on.

While enjoying this tradition with his nieces and nephews, Scott Houdashell from Amarillo, Texas, was taken aback by the mess that was created during the process. Dyes, glitter, and other decorations were scattered across the table, resembling the aftermath of what can only be compared to as a colorful explosion.

After witnessing the color fiasco, Houdashell thought to himself, “There must be a less messy yet still enjoyable way to color Easter eggs.” His first prototype, created using an electric screwdriver, hot glue gun, and spoon didn’t really pan out like he had hoped.

Houdashell spent the rest of the year developing an array of prototypes until finally, just before the next Easter holiday, he found one that looked promising. His new contraption, a colorful egg-shaped container which rotates the egg, proved to be a better way for children to dye Easter eggs.

Thanks to his new design, Houdashell’s nieces and nephews were able to hold safe, non-toxic markers up to an Easter egg while his invention, the Eggmazing Egg Decorator, would rotate the egg, creating a colorful design.

Houdashell allowed his family and friends to test out his invention and it turned out to be a big hit. From there, only seven short months after his successful product launch, Houdashell was featured on numerous television programs and had a stock pile of 10,000 egg decorators waiting to be shipped to families across the country.

His invention of the Eggmazing Egg Decorator even led way for a Houdashell’s latest invention, the Treemendous Ornament Decorator. Thanks to this inventor, children all over the world now have a better way to create holiday crafts that won’t destroy the kitchen.