15 of the All-Time ‘Best’ Product Failures 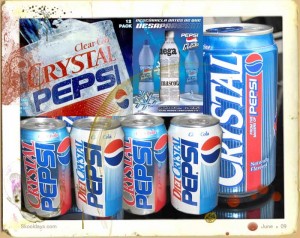 When a company has a great product, decision-makers often get swept up in their own success. And overwhelming sales and popularity of one product can make it seem like a brand can do no wrong. Well as Smith & Wesson mountain bikes and 14 other product failures would prove, not all that glitters is gold.

When America averages 70 to 100 guns per 100 people (according to Forbes), it would stand to reason that that popularity would translate to bicycle sales, right? S&W had been selling bicycles to law enforcement, security and emergency response since 1997, so in 2002 the company tried to break into the consumer bicycle market. How many of your friends have one?

Any product that proudly touts the nickname “Hogs” probably shouldn’t venture into the aroma trade. Harley Davidson has a rabid fanbase, and company execs wrongly believed anything with the Harley name would sell. Alongside aftershave and perfume, the company also launched Harley Davidson wine coolers. As you would expect, the bikers were not impressed.

We’re not sure who thought liquid candy would be an appealing thirst-refreshment choice, but the people at Life Savers apparently taste-tested this beverage bust. According to Time article Top 10 Bad Beverage Ideas, “The drink, developed in the 1980s, actually fared well in taste tests. But it tanked once in stores. Explained one brand critic, quoted in the 2005 book Brand Failures: ‘The Life Savers name gave consumers the impression they would be drinking liquid candy.’”

Your body needs to have a healthy amount of ”good” bacteria in the digestive tract, and many yogurts are made using active, good bacteria. And if yogurt is good for your system, why not skip the stomach middleman and apply it directly to your hair? The product was an instant failure in test markets.

You know the feeling. When you are standing in the bathroom brushing your teeth and think to yourself, “I could really go for a pot roast right now.” The problem with Colgate Kitchen Entrees was that no one knows that feeling. And don’t try to convince us your product is tasty by forcing “kitchen” into the title.

Spoofed fantastically on Saturday Night Live as Crystal Gravy, Crystal Pepsi never caught on with consumers. Crystal Pepsi hit the market in 1992 and was gone by 1993. Crystal Pepsi was color and caffeine free and free of consumer interest.

The Arch Deluxe was marketed as a burger for adults. The New York Times reported in 1996, “McDonald’s officials said at the time of the introduction in May that they believed the Arch Deluxe would generate $1 billion in sales in its first year, and the company has said that sales of Arch Deluxe have been strong. “Mr. Rensi [Edward H. Rensi, CEO] tried to marshal market-research data in a defense of the Arch Deluxe to the franchisees, writing in summary: ”Only those who expected a miracle were disappointed.”

In the early 2000s, Levi’s debuted the Type 1 jeans and aired an expensive Super Bowl commercial to go with it. The jeans feature oversized rivets and buttons, bold stitching, and an accentuated red tab. The look never caught on (nor did it find a target audience) and Levi’s quit making the jeans soon thereafter. – Business Insider

The PCjr was IBM‘s first attempt to enter the home computer market. The PCjr, IBM model number 4860, retained the IBM PC‘s 8088 CPU and BIOS interface for compatibility, but various design and implementation decisions led the PCjr to be a commercial failure.

The Edsel debuted in 1958, and according to Time, “Ford’s marketing mavens had led the public to expect some plutonium-powered, pancake-making wondercar; what they got was a Mercury.” It was last produced in 1960.

According to the Coke website, “The return of original formula Coca-Cola on July 11, 1985, put the cap on 79 days that revolutionized the soft-drink industry, transformed The Coca-Cola Company and stands today as testimony to the power of taking intelligent risks, even when they don’t quite work as intended.  ’We set out to change the dynamics of sugar colas in the United States, and we did exactly that — albeit not in the way we had planned,’ then chairman and chief executive officer Roberto Goizueta said in 1995 at a special employee event honoring the 10-year anniversary of new Coke.”

First released in November 2006, the Zune was Microsoft’s answer to the iPod. While it had features that the iPod lacked (like sharing music from player to player), the Zune, despite an expensive marketing effort by Microsoft, never really caught on. – SalesHQ

3. Sony MiniDisc
Introduced in 1992, Sony envisioned the MiniDisc (MD) as a replacement for cassette tapes. The company wanted to produce a device that combined the portability of cassettes with the Magnetic-Optical technology being used in CDs. Despite its failure with popular culture, the MiniDisc was available until 2011. — SalesHQ

The Apple Bandai Pippin is a multimedia technology console, designed by Apple Computer. The console was based on the Apple Pippin platform – a derivative of the Apple Macintosh platform. The goal of the Bandai Pippin was to create an inexpensive computer aimed mostly at playing CD-based multimedia titles, especially games, but also functioning as a network computer. — OVGuide

Billed as an invention that would change the way cities are designed. The Segway, code-named “It” and “Ginger” before its debut, had the world buzzing in anticipation. Then it was released. Priced at or above $5,000, consumers quickly lost interest in what is now a glorified scooter for security guards and tourists.