What’s Next for Facial Recognition Technology? 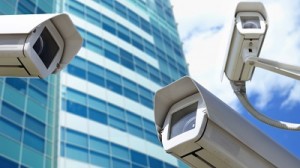 Facial recognition is a technology that has long been used for surveillance purposes and by law enforcement officials to pick someone’s face out of the crowd and compare it to images in a database, in order to learn someone’s identity.

Facial recognition seems to be the next big thing in the future of technology. For instance, Minnesota-based company, Identix, created their own facial recognition technology. Identix created software called, Facelt, which has the capability to recognize a face and measure its various features.

Each person’s face is different, which allows Facelt to distinguish differences by measuring individual characteristics, such as the distance between eyes, width of nose, the shape of cheekbones, etc. All of this information creates a numerical code called a faceprint.

Early forms of facial recognition technology continually ran into problems using 2D technology. Due to the fact that even the smallest change in light in the environment could reduce the overall effectiveness of the technology, the rate of failure increased.

Despite the growing problem of the inaccuracy of identifying people, a solution was quickly discovered in 3D software.

This new type of technology captures a real-time 3D image of the surface of a person’s face. Lighting does not affect this technology; in fact, it can be used in darkness and has the ability to identify a subject at different angles, with the probability of recognizing up to 90 degrees, which is a face in profile. 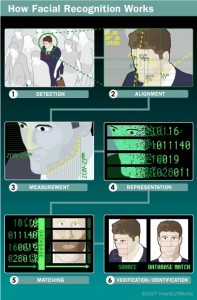 The 3D software goes through a series of steps in order to accurately identify a person. The first step is detection, which acquires an image by digitally scanning a live picture of a subject. Once this has been accomplished, the technology determines the head’s position, size and pose. The system then measures the curves of the face and creates a template. From there, a unique code is created and matched in a 3D database. After all of this information is collected, an image is matched to only one image in the database.

Although this type of technology is still being used by law enforcement officials and for surveillance purposes, it has recently been adapted for advertising purposes.

Companies like Redpepper are beginning to use facial recognition to boost their business. This may be the new route that advertisers take to target consumers. At its core, facial recognition technology is a computer application that automatically identifies or verifies a person from a digital image or video frame from a video source. 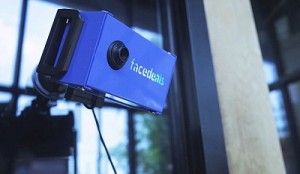 Although facial recognition technology is an essential tool in identifying people, it is now being beta tested by advertising companies such as Redpepper to target consumers and create customized deals through the structure of their face.

A team of developers for the company are currently working on creating a facial recognition technology for businesses to automatically send deals to the customers that walk into their establishments.

In order for the person to get the deals, their face will be scanned, using a Facedeals camera box that will be located outside of the business. In addition, the customer must authorize the Facedeals app on their Facebook account. Facedeals scans your history of Facebook likes and, with that information, customizes deals based on those likes.

Just like most inventions, as technology continues to evolve, solutions for longstanding problems are quickly coming to the surface through innovation and creativity; and consumers continue to reap the benefits. This holds true for facial recognition technology, as it soon may be commonly used for advertisements.