We are STUFFED with Excitement! 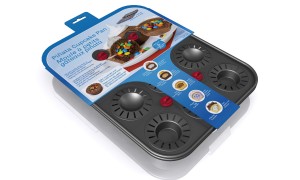 In perfect “Throwback Thursday” fashion, we’d like to throw it back to yesterday afternoon, when the Mrs. Fields Bake N Stuff Cupcake Pan was featured on QVC!

You’ve previously been introduced to the Mrs. Fields Bake N Stuff Cupcake Pan, a product that our friends over at Inventionland designed for the Love Cooking Company.

Well yesterday, this innovative baking product premiered on QVC and was repackaged as the Piñata Nonstick Cupcake Pan.

Let’s just say, it made quite the first impression!

In fact, the Piñata Nonstick Cupcake Pan was the very first product that was showcased on the “Kitchen Unlimited with Carolyn” show.

At the top of the show, host Carolyn Gracie and QVC kitchen product specialist Marie Louise Ludwig served up “a new twist on a cupcake pan.” 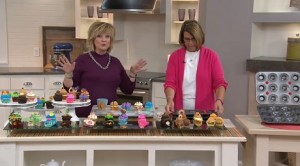 Of course, the “new twist” that they were talking about is the Piñata Nonstick Cupcake Pan!

With various kinds of candy and icing inside, the baking-duo perfectly paired the Piñata Nonstick Cupcake Pan as a product that’s perfect for both men and women in the kitchen who are trying to impress their kids or grandkids or to even cater to various tastes at school functions.

Ludwig even noted that the pan would be perfect for the popular gender-reveal baby showers!

“It takes basic cupcakes and turns them into something phenomenal,” said Ludwig, adding that the pan was also incredibly easy to use. “Basically, the pan does all the work for you,” said Ludwig. 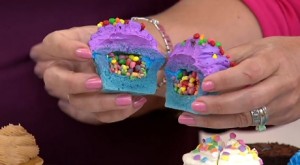 If you missed seeing the Piñata Nonstick Cupcake Pan on QVC yesterday, don’t worry, you can watch it here now!