This Invention Will Take your Thoughts to Another Dimension

Have you ever believed that your thoughts were so deep and innovative that they could be considered a work of art? Well, if by the off chance you have, the idea of your thoughts being a work of art might not be as far-fetched as one would think, thanks to the invention of 3D printing!

Imagine this; you are sitting in a room with a NeuroSky electroencephalogram (EEG) sensor pressing against your temple and forehead. Across from you is a TV screen that is showing abstract shapes as they swell and mutate in 4K resolution.

All the while you are sitting there, a computer is measuring your brain activity and mapping it as a 3D model. Initially, the model looks a lot like a piece of paper with a flat surface. However, that doesn’t last long because as soon as your brainwaves register a sense of concentration, a dimple appears on the surface. Next, when feeling a sense of calmness, the surface is pushed upward into a peak. Since emotions can’t be measured, intensities are used instead. 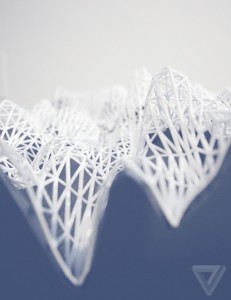 The maps are edited in a 3D modeling program where Popian and his programmer, Thomas Martinez, convert the data into a smooth, rippling landscape that is then 3D-printed. Once it’s printed, it essentially creates a tangible model of your mind. So, in essence, your mind is a piece of art.

Popian wants to turn the models into something that is more three-dimensional by morphing them into free-standing figures rather than the rolling planes.

This innovative usage of 3D technology shows that even art has the capability to find solutions to common problems. The problem at hand, as described by Popian, is that in architecture, emotion doesn’t usually factor in to how a structure is designed. Popian also says, “Architecture has a visual impact on whoever occupies it, which produces emotion.” The EEG technology could potentially affect how buildings in the future are designed. Because, as he explains,  if the subconscious relationships of people as they experience spaces like a hospital or airport are mapped, then there is the chance that architecture could be designed in order to be responsive to them.

Without further ado, here is a video of this innovative invention at work!