This Invention will Keep you Covered

As the weather is slowly starting to change for the better, spring rain showers are imminent. April rain continues to creep into the weather forecast, so umbrellas are a common sight when venturing outdoors to work or running errands.

The invention of the basic umbrella dates back four thousand years and counting. Evidence of this invention has been tied to the ancient art and artifacts of Egypt, Assyria, Greece and China.

Otherwise known as a parasol, the first umbrella was initially designed in order to provide shade from the sun. However, the umbrellas that we use today to shield us from rain were invented by the Chinese, who were the first to waterproof their umbrellas.
As time went on, the umbrella became popular in the western world during the 16th century, especially in the rainy weather of northern Europe.

The traditional umbrella that is used to shield a person from shade and rain has continued to evolve; now, this invention has become more and more innovative as time has gone on. Let’s take a look at some of the latest umbrella innovations!

Upbrella- Maneuvering around crowded city streets is a pain as it is. But, add in umbrellas when it’s raining and your frustration mounts as you are constantly shifting your umbrella up and down, so that it doesn’t bump into another passerby’s umbrella. The Upbrella is an invention prototype that will extend your umbrella with the push of a button, allowing your umbrella to stand above the rest. It’ll help keep you dry and sane while avoiding knocking into others. 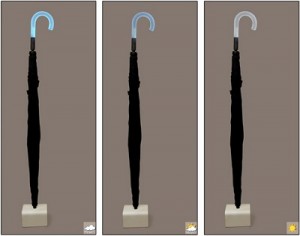 Forecast- Getting ready in the morning is quite the whirlwind. You usually grab your coffee mug and lunch as you head out the door. However, on some days when the weather looks threatening, you may not have the time to check the forecast, which leaves you to question whether or not you should bring your umbrella. On those days, there is a new invention idea that uses existing Wi-Fi technology in order to wirelessly pull weather information from the internet. This invention is known as the Forecast. The lighted umbrella’s handle glows more intensely as the chance of precipitation increases, which offers a clear and unobtrusive signal to the user. 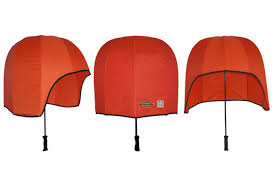 Rainshader- When it’s windy and rainy; the odds of your umbrella turning inside out are highly likely. That is until the Rainshader came on the scene and re-invented the design of the classic umbrella. This invention channels water forwards and backwards via parallel panels of material. The back of the Rainshader hangs low over the user’s shoulders while the front is cut away to see forward. This invention has undergone wind tunnel tests up to speeds of gale force 7. The innovation doesn’t stop there; a prototype for this invention was created by a 3D printer at the University of Warwick’s WMG manufacturing center. The prototype is a helmet-shaped umbrella that doesn’t turn inside out, drip on you or others, or poke people in the eye.

Umbrellas have been around for quite some time and as they continue to evolve, whether it’s through an innovative design or technology, no matter what the shape or look of the umbrella is, this invention has one goal in mind and that is to keep you dry on those rainy days!