Serving up a ‘Slice’ of Freedom

Forget everlasting gobstoppers from Willy Wonka, what about everlasting pizza? The military might have just delivered a tasty new invention.

The latest military prototype is a pizza that can stay on the shelf for up to three years and still remain safe and edible. 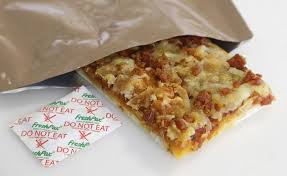 For a while now, soldiers have been requesting pizza for their field rations. These field rations, otherwise known as meals ready to eat (MREs), replaced canned food in 1981 for soldiers in zones where a field kitchen could not be set up.

Researchers worked to combat this problem and find a better way to feed their soldiers. And now, the final ingredients for a pizza recipe that doesn’t require any freezing or refrigeration may soon be completed at a U.S. military lab in Massachusetts.

How on earth can it be possible that a pizza that doesn’t need to be frozen or refrigerated can last up to three years on the shelf and still be edible?

Considering that pizza has become one of the most requested items that soldiers would like to see in their rations, researchers spent nearly two years developing the recipe in a large commercial kitchen.

Who knew that moisture in tomato sauce, cheese and toppings could be the bane of the scientists’ efforts? Well, considering that these pizza components migrated into the dough and, over time, resulted in soggy pizza and the perfect breeding ground for mold and disease-causing bacteria to grow, scientists had to rework the recipe.

Next, the researchers were tasked with finding a solution to this problem. This included using ingredients called humectants-sugar, salt and syrups. These ingredients would all bind to water and keep it from getting to the dough. But, that alone wouldn’t help keep the pizza fresh for three years at 80 degrees.

Just like any invention, the pizza needed to be tweaked to be better, so scientists played around with the acidity of the sauce, cheese and dough to make it harder for oxygen and bacteria to thrive. Additionally, they also added iron filling to the package, in order to absorb any air that remained in the pouch.

So, what’s the verdict on the taste of the latest military invention? Well, most soldiers haven’t tried the pizza, because it is still in the development stages. However, Jill Bates, who runs the lab, says that she was happy after tasting the latest prototype batch of pepperoni pizza. In her description, she says that it’s reminiscent of a pan pizza. The crust is a little moist, but not super-crispy.

By the way that things are going, it seems like pizza will be on the MRE menu soon enough!