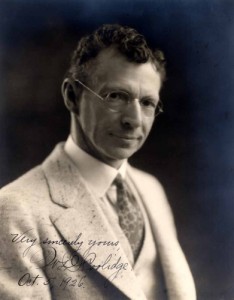 William Coolidge was an American physicist who invented many things, such as ductile tungsten, which was used as the filament for incandescent light bulbs. This product not only supplanted the more brittle carbon fibers of Edison’s original design, but made it viable to mass produce light bulbs. He also invented a portable x-ray machine that was used in field hospitals in World War I. However, Coolidge is probably best known for inventing what is considered by many to be the modern x-ray tube, now known as Coolidge tubes. By adapting his ductile tungsten to x-rays, he was able to increase the strength and durability of x-ray tubes, which allowed for diagnostic-quality x-rays.

So let’s meet this inventor who also became the director of the General Electric (GE) Research Laboratory and eventually the company’s vice president.

William David Coolidge was born in Massachusetts in 1873. As a young boy, he showed a flair for putting things together. After a childhood spent working on his family’s farm, he applied and was accepted to the prestigious Massachusetts Institute of Technology (MIT) and chose to study electrical engineering. He also learned metal works in a part-time job and soon incorporated the two skills when he built a large electrostatic generator which he sold to a doctor’s practice.

Following his graduation from MIT, Coolidge traveled to Germany for his graduate studies with the pioneering physicists, Paul Drude and Gustav Wiedemann and also met with Wilhelm Roentgen, the discoverer of X-rays. After receiving his Ph.D. from the University of Leipzig in 1899, he returned to MIT for his post-doctoral research training.

By 1905, Coolidge decided he had had enough of academia and went to work at General Electric Company’s Research Laboratory. Coolidge negotiated a contract where he could spend half of his time working on his own research while using the company’s equipment. Because of his brilliance, GE had to agree because the scientists at GE were working on an international conundrum and needed some major brainpower. It turns out that an international quest for a long-lasting light bulb filament was taking place and labs all over the world were racing to find a durable filament.

Coolidge was up to the task and though it took four years of research, he created ductile tungsten, a wire so thin it was only one sixth the diameter of a human hair yet durable enough to last many hours glowing hot as a filament; and, it also gave off twice as much light as other filaments. GE began marketing the new light bulbs in 1911, and in fact, the tungsten filament light bulb created by Coolidge is still in use today, more than 100 years from when it was invented. 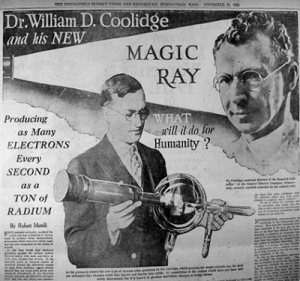 But bigger things were on the horizon for Coolidge. Ever since meeting Wilhelm Roentgen in Germany years earlier and learning about x-rays, Coolidge was intrigued by the thought of the use of x-rays as a diagnostic tool (as were many other physicists and physicians). But as with the first incandescent light bulbs, the filaments used in those first x-ray tubes couldn’t sustain the level of electricity that had to pass through the filaments and burnt out very quickly.

In his design, Coolidge adapted his ductile tungsten for the x-ray tube and was able to remove the ionized gas that needed to be injected in the older tubes to slow down filament burn-out. The “Coolidge tube” allowed for a steady, stable stream of X-rays to be generated and allowed the beam to be focused and targeted, ushering in diagnostic radiology and changing the practice of medicine forever.

At the time of his death at the ripe age of 101, William Coolidge held a total of 83 patents, had won several prestigious awards, including the Franklin Medal and Edison Medal, and was inducted into the National Inventors Hall of Fame. He also won the gratitude of millions of people who were helped by diagnostic x-rays.