April is National Lawn and Garden Month, which is appropriate since this is the wonderful time of year that buds start to grow back on the tress, birds can be heard chirping away, and our grass begins to look alive again. So it’s time to head down to the local garden shop and buy some mulch, fertilizer and garden soil. It’s also the time we all dust off our lawn mowers and begin our weekly ritual of mowing the lawn. So that got us wondering, how did the lawn mower come to be? Let’s find out. 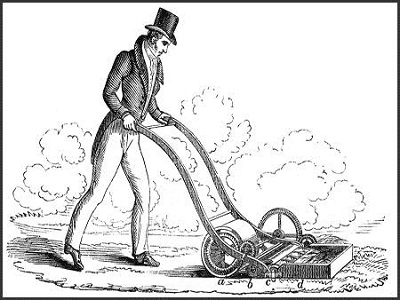 As it turns out, the lawn mower was invented in 1827 by Edwin Budding, an engineer from Gloucestershire, England. The story goes that he got the idea for a lawn mower after seeing a machine in a cloth mill that used a bladed cylinder to trim the fringed edge off cloth after it was woven on a loom. Budding realized that a similar concept would cut grass if a bladed cylinder could be mounted in a wheeled frame and pushed over the lawn’s surface.

So Budding built a machine with a frame made of wrought iron and a rear land-roller which drove gears to transfer power to the rotating cutting cylinder. The mower was pushed from behind and after being cut, the grass clippings sprayed forward into a tray. After getting a financial partner, Budding started to produce his lawn mower and soon they were selling mowers and cutting licensing deals to allow other companies to build copies of their mower.

In the 1860’s, a competitor named Thomas Green introduced a mower which used a chain to transmit power from the rear roller to the cutting cylinder. These machines were lighter and quieter than the gear driven machines that preceded them, although they did cost a little more. After that, several other inventors jumped into the market, both in the UK and in US, with various incremental improvements to the machines. One such inventor was Elwood McGuire, who in 1870 designed a machine that basically brought push mowing to the masses. It was lighter, easier to push and had fewer moving parts than the old versions. 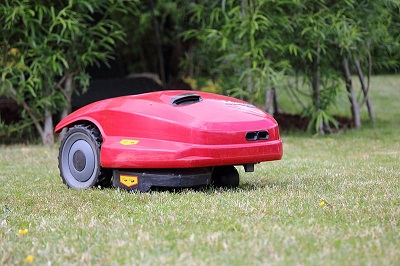 In 1902, a British company called Ransomes produced the first commercially available mower powered by an internal combustion gasoline engine, though surprisingly, the first gasoline powered mowers in the US wasn’t sold until 1919, when a Colonel in the Army put a gas engine on his mower. But with the Depression of the 1920’s and 1930’s, and then World War II, it really wasn’t until after the war that Americans started to flock to hardware stores across the country to purchase a shiny new gas-powered lawn mower.

Today we have electric mowers, battery powered mowers, lawn tractors, even robotic mowers (think Room-bot) to help cut our lawns, so it’s clear that our love affair with the lawn mower is here to stay. In fact, a lot of people really enjoy the process of mowing their lawn. Maybe it has something to do with our instinctive need to establish order, or maybe it’s just about using all that power to discipline those unruly blades of grass. Either way, all we can say is, “Ladies and gentlemen, start your engines.”