As the fourth of July approaches, most of us will be gearing up for a splash in the pool, great barbeque and the traditional fireworks display that never ceases to amaze us. Whether it’s a small, hand-held Roman candle or a gigantic starburst exploding way over our heads, fireworks bring out the kid in all of us.  So that got us thinking: Who invented fireworks?  How did all of this start? Well, we did a little research and here’s what we found. 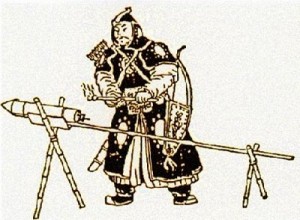 Some people believe that fireworks were invented in China about 2,000 years ago. Others say it happened sometime during the Sung Dynasty (960-1279 AD). Either way, China is generally acknowledged as the birthplace of fireworks. The story began when an alchemist mixed sulfur, charcoal and saltpeter together to see what would happen when it caught fire. Of course, it flashed brilliantly. He then decided to pack the black powder (i.e., gunpowder) into a hollow bamboo shoot to see what would happen.

The bamboo packed with gunpowder shot flames out the ends and lo and behold, the rocket was born. When the powder was packed tightly and both ends were sealed, it became a firecracker. Soon, everyone was using these rockets and firecrackers for entertainment and celebrations as well as to scare off evil spirits and promote prosperity. But it didn’t take long for somebody to figure out that these rockets and firecrackers could have a military application, and there are verified historical reports that rockets were used against the Mongol invaders in 1279. As explorers such as Marco Polo visited China, they returned home with gunpowder, fireworks, and rockets—and the knowledge needed to create them. Interestingly, China still remains the king of fireworks. Today, the country manufacturers and exports an estimated 90% of all the fireworks in the world. 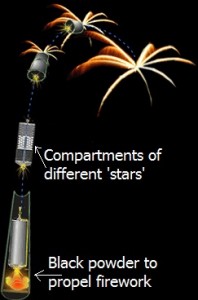 The basics of fireworks hasn’t changed that much since the beginning—gunpowder is packed in a tube that powers the rocket into the sky where firecrackers, known as stars, are ignited and explode in the air. Of course, there have been some changes that have increased the beauty and power of these aerial bombs: copper, barium and sodium were added to the gunpowder mix to give us those awesome colors; timers were added to explode the shells at precise time intervals; and the stars were configured to either explode or squiggle through the sky. Now, fireworks are launched using compressed air rather than gunpowder, which makes setting off fireworks safer. This also allows for better timing of launches, making it easier to accurately synchronize the pyrotechnic display with music and other show features. 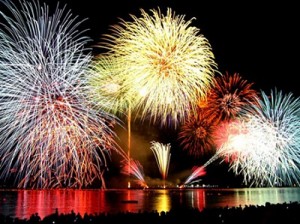 This week, as we have done for over two hundred years, Americans will celebrate the fourth of July with fireworks displays in just about every city, township and borough across the country. We’ll sit on our blankets or our lawn chairs, drinks in hand and eyes transfixed on the skies as the first rocket shoots off and bursts into an explosion of dazzling light. We will feel the shock waves of the loud booms and hear those “ooohs” and “aaaahs” that are almost an involuntary response to the beauty and power of fireworks.  Happy Fourth of July!!!