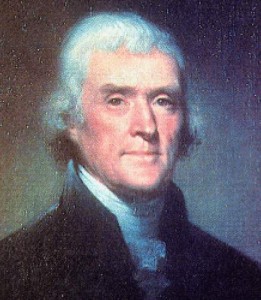 Many people know that Thomas Jefferson was the 3rd president of the United States, the author of the Declaration of Independence and the founder of the University of Virginia, but not everyone associates him with being a successful inventor.

Jefferson created many well-known inventions such as the polygraph, the pedometer and the hideaway bed. Some of his most interesting inventions; however, are perhaps those that few have heard about. Check out a few of these inventions that are on display at the Monticello in Charlottesville, Virginia.

Moldboard of Least Resistance — A moldboard is the curved part of a plow that turns over the soil. Jefferson designed it so that it was light enough to be pulled by two small horses or mules with little effort. Because this was such a revolutionary invention at the time, France’s Society of Agriculture awarded him a gold metal for the design.

The Great Clock — This innovative clock was powered by two sets of cannonball-like weights that were eighteen pounds each. These weights drove its ticking noise and the gong that sound on the roof. The clock also revealed each day of the week and was wound every Sunday with a key to restart its weekly cycle. The Great Clock was designed by Jefferson; however, we must credit Peter Spruck for its development.

Spherical Sundial — Although original sundials are thought to have originated around 3500 B.C.,  Jefferson is credited to inventing the first spherical sundial — which was considered a novelty in its time. The horizontal lines were drawn for the Tropic of Cancer, the Equator, and the Tropic of Capricorn. The vertical lines that extended from tropic to tropic represented the hours of the day — indicated by Roman numerals below the Tropic of Capricorn.

There is no doubt that Jefferson was a president that strived on innovation — his own inventions are great indicators of his this. There is no better time than on his birthday to recognize how important his life and accomplishments were to both the U.S. and the rest of the world.