When we think of the future we imagine flying cars, teleportation and floating cities — all high-level advancements that will make everyday life easier. But did H.G. Wells ever predict we would need to relearn how to type?

A growing population believes in 10 years we’ll be saying goodbye to the QWERTY keyboard and hello to lasers, touchboards and orbs.  Good thing you can start practicing with your new keyboard today.

“With a detection rate of up to 400 characters per minute, it will keep up with even the fastest typists among us – rapidly transmitting as far as 9 meters from your device. The unit includes simulated key-click sounds for feedback during use and its built-in lithium-ion battery is good for up to 120 minutes of solid typing, so you can use it on the go without needing to be tethered to a wall.” 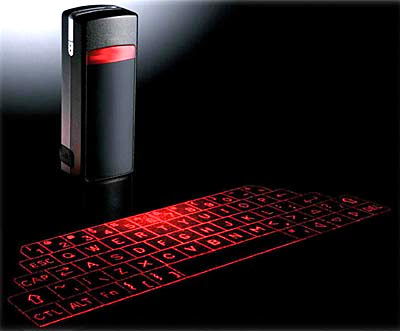 According to Web magazine Yanko Design:

“Glass surface inputting is the new hotness for almost every gadget maker today. From from the iPhone to Microsoft’s Surface technology, flat is where it’s at. Introducing the flattest full size QWERTY keyboard to date, “No-key Keyboard” by Kong Fanwen. Consisting of just a glass surface, camera and lighting, this alternative keyboard concept will use the latest motion capture technology to watch your fingers nervously select just the perfect smiley for your online bantering.”

The Optimus Tactus is a full touchscreen keyboard that can be programmed to show you whatever keys you need at the moment. You can even eliminate entire keys in ‘movie mode.’

Quick to dismiss the inconvenience of learning a new keyboard system?

“I believe Apple deliberately used its red-hot iPhone product to force the world to accept and learn to appreciate on-screen keyboards, and break them of their physical keyboard habit. When Apple released the iPad a year ago, it was usable with two Apple keyboards (the standard Bluetooth keyboard and a new cradle keyboard). But no matter. The on-screen keyboard idea had already been accepted by a critical mass of users.”

So the next time you think your touch screen keyboard skills are up to par, think again.  The keyboard revolution is coming.