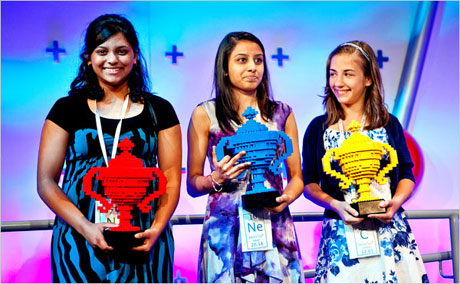 According to About.com, approximately 20% of all inventors are currently female, and that number should quickly rise to 50% over the next generation. Judging by the results of the first annual Google Science Fair, however, the number of future female inventors could be even higher, particularly in the U.S.

Competing with more than 10,000 students from 91 countries, American girls took first place in all three age categories in the recent science fair. The entries were narrowed down to 60 semifinalists, and then to 15 finalists who presented their findings to judges at Google’s y headquarters last month.

The winner in the age 17 – 18 category tackled ovarian cancer and presented research that could improve the effectiveness of a chemotherapy drug. The other winning projects dealt with the effects of air quality on lungs, and reducing cancer-causing compounds produced by the grilling of meat (news: lemon juice and brown sugar marinades – good; soy sauce marinade – not so good!)

Of the 15 finalists, nine of the entries were from boys, so it is clear there are still many budding male inventors. But the sweep of American girls has defeated two long-held stereotypes: that science is a male-dominated field, and that American students are lagging behind other countries in science. Congratulations to all the winners and finalists!

Read the interesting New York Times article on the results of the Google Science Fair!