A Better Way To Keep Your Pants Up!

In the summer of 2019, Gordon decided to get an early start on his winter preparations. Gordon has lived in Pennsylvania for his entire life, so he knows how important it is to properly prepare the yard and outside furniture for the brutal winter that is sure to come.

And so, Gordon began to rake the leaves, assess broken/dead trees and pick up limbs lying around. Not long after starting his winter prep to-do’s, Gordon found himself getting irritated, not because it was a hot and humid day and not even because he was dreading another winter. He was frustrated with his pants and belt!

After cutting down a couple of dead trees, Gordon had to stop what he was doing and turn off the chainsaw just to tug on his pants.

“My pants just kept sliding down and made my belt buckle dig into me,”  – Gordon explained.

In his moment of frustration, Gordon slung off his belt, tossing it to the ground. He then grabbed a bungee cord from his pile of tools and quickly wrapped it around his waist.

“There, that should hold ‘em up…geez!”

Gordon then went directly back to his tasks and continued to cut down the dead trees and shrubs.

Hours later, Gordon was finally done. He removed the bungee cord from his waist and used it to bundle up some limbs lying around… and that’s when it hit him – his “a-ha” moment!

Gordon thought, what if I could bypass the frustration… better yet, what if I could help others avoid the same frustration by creating a comfortable belt that sits on the hip just right while applying pressure in such a way that I would never have to feel my belt buckle digging into me again.

Soon after Gordon’s “a-ha” moment, he put and his trusted team to work, creating what we know today as The Bungee Belt!

Whether it’s a brand-new product idea or a product already on the market that needs to be updated and reinvented, our 9-step inventing method has you covered!

Keep Your Pants on With, The Bungee Belt! 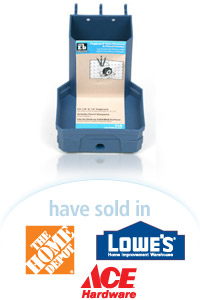